A mile-wide asteroid with its own moon will pass within 3.5 million miles from Earth this weekend, by far the largest this year to come within range considered potentially dangerous.

A binary asteroid system, a nearly mile-wide asteroid with its own moon, will pass within 3.5 million miles of Earth this weekend, and while there is no direct threat, it is still the largest asteroid to pass within the range considered to be "potentially dangerous" this year.

A Binary Asteroid System Flyby Set for This Weekend

Binary asteroid system 1999 KW4, a nearly mile-wide walnut-shaped chunk of space rock with its own moon, will pass by Earth on Friday, CNet reports. Its closest approach is projected to be 3,219,955 miles from Earth, and while this is a healthy distance from us, it still falls within the range of 20 lunar distances--or just over 4.6 million miles--to be considered "potentially hazardous."

RELATED: 85 PERCENT OF THE ASTEROID BELT IS COMPOSED OF THE REMNANTS OF ANCIENT PLANETS

Besides the much larger primary body, tagging along for the ride is a small moon, the secondary body, about a third of a mile wide that together with the main body orbits a shared center of gravity. The orbit of the moon runs above a mountain ridge along the equator of the primary body which, according to the Las Cumbres Observatory, "gives the primary an appearance similar to a walnut or a spinning top. The secondary is about 500 meters across, and the two asteroids orbit each other every 17.5 hours at a distance of about 1.6 miles."

The walnut shape of the primary body isn't that unusual, many large bodies in space show a similar bulge along the equator. The Earth itself is similarly shaped, though not as noticeably as the primary body of 1999 KW4. This is a result of the centrifugal force produced by an object's rotation on its axis, which causes the object to bulge at its equator and flatten out somewhat at its poles. That this results in a mountain ridge that runs the entire length of the equator is a neat fact that can be appreciated knowing that we won't have to see it from up close. 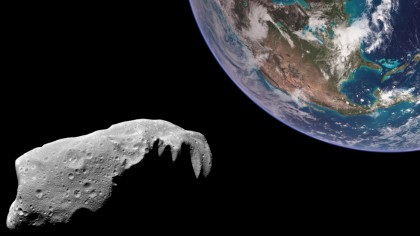 The asteroid system will be tracked with telescopes to gather data on the composition of the two asteroids as well as data on the gap between them. As Ultima Thule revealed this year, these kinds of systems are very likely how the rocky planets of the solar system first formed. We won't get to look at it for long though, as it will be speeding past at 48,123 miles an hour; though as CNetpoints out, this will actually make it easier for amateurs to spot on the ground, as it will likely be the fastest thing moving in the sky. They recommend heading over to EarthSky to learn how you can see 1999 KW4 for yourself.