There are innumerable near-Earth asteroids that could supply us with plentiful resources in the future. If we could exploit these resources it could add trillions of dollars to the world economy and push us to expand beyond our home planet. This could even create an entirely new suite of industries and occupations. Exciting, but could asteroid mining be possible?

There is already great interest in this from a few private companies. Planetary Resources, for example, is a billionaire-backed enterprise that aims to make this a reality. Everyone involved is under no illusion this will be simple. It will require melding space exploration with current mining expertise.

Near-Earth asteroids or even comets could provide us with vast quantities of minerals and volatiles. To tap these resources we could either mine them in situ or drag them back to Earth for processing. Typical "treasure" could include gold, iridium, silver, osmium, palladium, and tungsten that would be useful to bring back to Terra Firma. They could also have massive quantities of construction materials such as iron, cobalt, manganese, molybdenum, nickel, aluminum and titanium.

Some may even have large quantities of water and oxygen, vital for life support and growing food. Hydrogen, ammonia, and oxygen would be very useful for refueling too! Just think of it, asteroid fuel stations, amazing!

As resources begin to dwindle on Earth asteroid mining might be an answer. Known terrestrial reserves of key resources, some believe, could be exhausted within as little as 50-60 years. If true, the development and refinement of asteroid mining will become increasingly important. 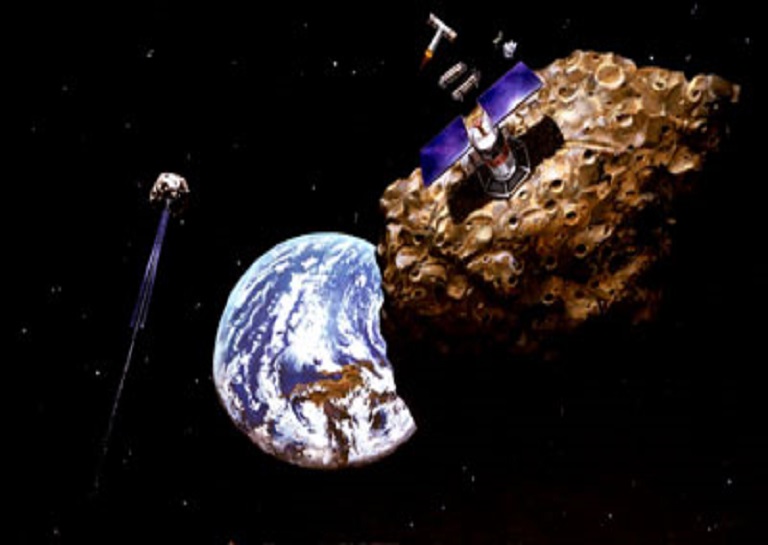 Since anything to do with space is generally very expensive, selecting appropriate targets is of paramount importance. An important factor of which is termed "orbital economics". The main considerations being the change in velocity (Δv) and travel time to get to and return from the target asteroid. Quite simply, why bother if it'll cost you more to go there than you can recoup? If we are talking about a return trip of course.

For this reason, near-Earth asteroids are likely to be the most profitable, at least in the short term for asteroid mining. As they are "so" close" to Earth there should be a net gain from exploiting them. The material could be extracted and returned to near-Earth space facilities for processing and distribution. This will dramatically reduce the cost of transporting supplies to Earth.

Plus we need to know what's on the asteroid before we go.

Asteroids of particular interest include the following.

These have a high concentration of water, carbon, phosphorus and other key ingredients for fertilizers, amongst other things. These babies are good potential sites for refueling posts. Long distance space exploration would greatly benefit from frequent pit stops after all. The presence of materials vital for life could also be exploited for growing food! About 80% of asteroids are C-Type.

S-Types are closer to us than C-Types. These bad boys are high in metal content including nickel, cobalt and more valuable metals like gold, platinum, and rhodium. It has been estimated that a small 10 meter S-Type could yield as much as 650,000 kgs of metal and 50kg of rare metals. Definitely worth considering for asteroid mining.

M-Types are rarer S-Types on steroids. These bad boys have about 10 times more metals than S-Types. Definitely worth considering for mining.

A group of researchers identified a set of easily identified objects (ERO's) in 2013. They managed to catalog around 12 asteroids which in theory could be exploited using current technology. They believe this dozen could be brought into an Earth accessible orbit for exploitation.

Generally, most options currently considered involve a variety of scenarios. One "simple" method might be to just mine material and bring it back to Earth for processing. Another option would be to dig the material out and process it on site. Ideally, the return vessel could also be refueled on site for the return trip. Of course, we could snag and drag the entire thing back to Earth, or near Earth for processing.

This last option is thought to be the most efficient as it will maximize extraction.

The return to Earth option is currently being considered by NASA. They have proposed a future mission called the Asteroid Redirect Mission to make this a reality. Though the project's future is currently in doubt.

As for the actual extraction of material, there are various methods being considered.

Other options include the following.

Surface asteroid mining is one option. It's pretty self-explanatory. The idea is to mechanically scrape, scoop or grab chunks off the surface using scoops, augers or claws. Fair enough.

For subsurface material, as here on Earth, a more invasive technique would need to be employed. If we could build mine shafts into the asteroid, we would be able to maximize our prize. Of course, accurate surveys of the entire structure would be needed to make sure this is profitable.

Those target asteroids with high metallic content could have a lot of loose grains captured using magnets.

This method could be used to extract hydrated and other volatile resources from carbonaceous chondritic asteroids. Heat mining would allow for rapid recovery of water, water-soluble minerals, and other volatiles. On bodies like comets, heat would be invaluable in melting and/or vaporizing the matrix.

The ability to produce "settler" type machines to an asteroid that could self-replicate would enable a highly scalable "workforce" for mining. This would likely involve 3-D printing of course. Such a process would enable us to send a very small amount of machines initially to "settle" on the asteroid. These would then begin to mine, process and build more of their own to eventually mine out all of the useable material. They could, of course, be used to build infrastructure for human workers or even residents at a later date.

So there you go. A very brief exploration of this potential future industry. Are you excited about the potential of asteroid mining? Perhaps you have some suggestions?