The issue of space waste has long plagued astronauts and the NASA engineers tasked with designing a system to handle it. It all started back in 1961, Astronaut Alan Shepard found himself locked in the Freedom 7 capsule ready to fly into space. However, his lift-off time went through 5 hours of delays and after all time, Shepard really had to go to the bathroom. He radioed launch control and asked what to do. Officials were wary of letting him go in his spacesuit since it was full of electronics. Eventually, they had to let him go, and the decision was made to let Shepard soil his silver space suit.

The actual mission itself that Shepard was going on was only scheduled to last 15 minutes and NASA engineers were not prepared to deal with an Astronaut who had to go. 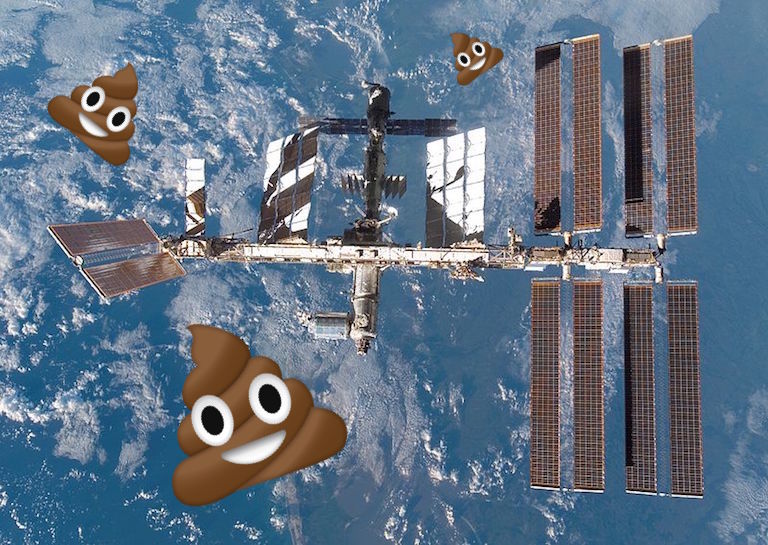 A few years later in 1963, Gordon Cooper was prepared to launch on the last Mercury mission. Engineers at NASA had designed a urine collection device that attached to astronauts' space suits inside the craft. Cooper's mission ended up having many failures and he had to manually pilot the spacecraft for re-entry. He was successful, but a slight error would have resulted in a total failure. As teams investigated what went wrong, it was determined that Gordon's urine bag leaked and ruined several electronic systems.

Up until this point, NASA had a troubling past with Astronaut pee. Engineers only dared to think about how they might handle dreaded floating feces when astronauts were up in space. Back in the 1960s when the first space missions were taking place, cabins were cramped and designing areas for bowel movements was no easy task.

NASA research moved into the Gemini missions which put 2 astronauts side-by-side in a spacecraft. This posed an unprecedented problem for engineering: double the waste. Not only this, but the astronauts were tasked with surviving for 2 weeks at a time in space with Jim Lovell and Frank Borman spending 14 days flying in the Gemini 7 capsule.

If you think NASA designed some fancy space toilet for the crew, you would be wrong. The crew of two was given a supply of plastic baggies to use when they needed to go to the bathroom.

Perhaps surprisingly, space toilets didn't get more complex with the Apollo missions. We often think of being an astronaut as a glamorous job, but the reality is that they had to poop and pee in bags right next to their fellow crew.

Buzz Aldrin and Neil Armstrong has fecal collection bags stuck to their butts with adhesive patches. With relatively no gravity in space, waste would float in these bags until the astronauts could change. NASA engineers did think around the problem of "separation" of waste by placing a small covered finger insert near the opening of the bag to allow astronauts to help move things along. The technical name for this given from NASA was a "finger cot."

When the bags were removed from the astronauts, the job, unfortunately, wasn't over. Each astronaut would have to mix a germicide into their waste bag so that it didn't produce bacteria and explode. 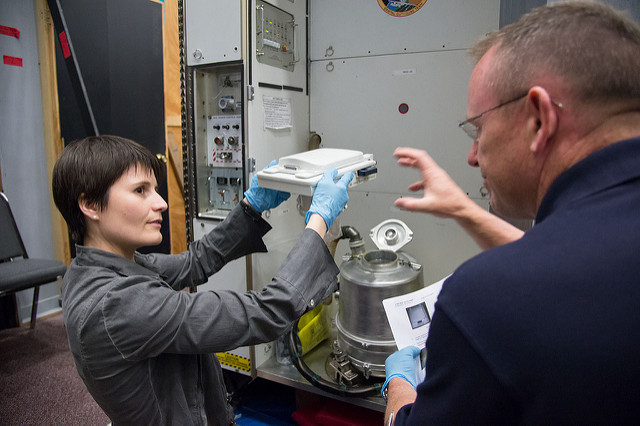 When this entire poop bag task was completed in the cramped Apollo quarters, it took about a total of 45 minutes. Instead of figuring out how to deal with waste more effectively, NASA engineers designed a special diet that would reduce astronauts' needs for bowel movements. They ate high-protein low-residue foods like eggs among other things.

For urine needs, the Apollo crews essentially peed into a vacuum tube that led directly into space.

Luckily, the task of relieving yourself in space has gotten much better for modern astronauts, but it still isn't easy. All crews that travel to the ISS have to undergo space toilet training.

ISS toilets work similarly to camping toilets. A small back is inserted through a hole, the business is done, then the bag is collected inside of a disposable container. There still is the illustrious urine hose with a vacuum for number 1, but now it doesn't vent into space. All urine collected on the ISS is recycled into drinking water through a machine that takes up most of the walls in the bathroom compartment. As for final disposal of number 2, about every 10 days the disposable container of solid waste is jetted into the atmosphere to make its way back down to earth, burning up in the atmosphere.

The video below from aboard the ISS will give you some deeper insight into just what the ISS crew has to deal with when they have to go.

How to fix a clogged space toilet

Breaking a space toilet is easy if you get it clogged and it's a very bad day when this occurs. The only space toilet on the ISS suffered problems back in 2007 and NASA decided to purchase a 19 million dollar Russian replacement that was installed in 2008. This price tag makes it the world's most expensive toilet but it certainly isn't the most comfortable.

One of the most comical aspects of space toiletry is the pee funnel. The pee funnel comes with 3 different sizes to accommodate differing individuals. According to many former crew members, male astronauts alway choose the largest funnel size which can cause sealing problems on occasion.

For now, space poop will continue to rain down on the earth in balls of fire and astronauts will continue in true Bear Grylls style. However, NASA engineers are currently brainstorming new methods to deal with solid waste on longer missions. When NASA sends astronauts to Mars, some plans call for solid waste to be recycled into a radiation shield for the craft. This would mean that human feces would line the walls of future Mars landers.

Being an astronaut isn't as glamorous as you might have thought.

SEE ALSO: The Internet Is Going Crazy Over This $10,000 Toilet