One of the riskiest events just got easier to execute onboard the ISS, as astronauts can now diagnose and treat sicknesses caused by microbes while in space.

Researchers aboard the International Space Station can breathe a sigh of relief. They recently figured out a way to identify microbes in real time, giving them the ability to diagnose and treat sicknesses without the delay of sending samples back and forth to Earth. The Genes in Space-3 team is responsible for completing the world's first-ever sample-to-sequence process on the ISS.

Given the volume of discoveries and exploration associated with being an astronaut, it's easy to forget about the conditions in which most of them live. Astronauts -- particularly those aboard the ISS -- have to live in some of the cleanest conditions imaginable. Bacterial pathogens and microbes that might seem easily treated on Earth could be detrimental aboard the ISS.

As Biomedical Central points out, the ISS has much to gain from learning about the microbiome in a highly-monitored environment. Traditional microbe analysis techniques have been done before, but there were gaps in timing or in information. This new method both streamlines the research while also making sure it's a complete picture of the microbe's DNA.

NASA's Peggy Whitson and NASA microbiologist and Principal Investigator Sarah Wallace collaborated from the ISS and Houston ground control, respectively. The project took place in two sections. First, the team had to collect microbial samples by Polymerase Chain Reaction (PCR). They then had to sequence and identify the microbes.

The Genes in Space-1 program was the first time that PCR was used while in space in order to analyze DNA. The team combined the miniPCR cycler, the Biomolecule Sequencer, and ultimately the MinION device in order to sequence DNA strands. This project combined the technologies in ways yet unseen -- especially not attempted before in microgravity.

In addition to the complexities of running the project, the timing and conditions were not in the astronauts' favor.

"We started hearing the reports of Hurricane Harvey the week in between Peggy performing the first part of collecting the sample and gearing up for the actual sequencing," said Wallace, referencing the Category 4 hurricane that devastated Houston in late August 2017. The hurricane made the Johnson Space Center inaccessible to Wallace and her team.

In order to bypass the hurricane destroying the city, a team from Marshall Space Flight Center's Payload Operations Integration Center became the new 'mission control.' They even connected Whitson to Wallace via Wallace's own cell phone.

After the connection could be established, Whitson could use the MinION technology to sequence the DNA. That data was then sent to Houston to be identified. 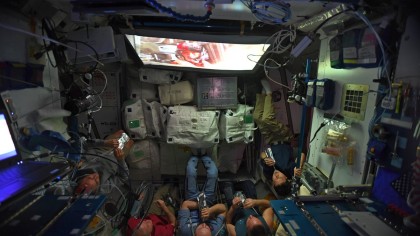 "Once we actually got the data on the ground we were able to turn it around and start analyzing it," said Aaron Burton, NASA biochemist and the project's co-investigator. "You get all these squiggle plots and you have to turn that into As, Gs, Cs and Ts." (Burton mentioned the four building blocks of DNA -- adenine, guanine, cytosine, and thymine. Combinations of those four elements can help identify organisms based on its DNA strands.)

"Right away, we saw one microorganism pop up, and then a second one, and they were things that we find all the time on the space station," said Wallace. "The validation of these results would be when we got the sample back to test on Earth."

The samples made it back to earth with Whitson herself when she returned on the Soyuz spacecraft in early September. Whitson, who herself had just broken the record of most days off planet, continued to help biosequence the findings from the station.

"It was a natural collaboration to put these two pieces of technology together because individually, they're both great, but together they enable extremely powerful molecular biology applications," said Wallace.