Astronauts Manage to Lose a Piece of the International Space Station

Even on the most routine spacewalks, things can still go wrong. Even the most experienced astronauts can make mistakes. This week's spacewalk saw two seasoned veteran astronauts suffering a mishap during a routine repair.

Astronauts Peggy Whitson and Shane Kimbrough went to repair a piece of cloth shielding on the International Space Station. Whitson managed to break a record with this spacewalk, becoming the oldest woman to perform one. At eight spacewalks, she also set the record for time spent during spacewalks, accumulating 53 hours. It'll certainly be a walk to remember, as the pair dropped a piece of shielding. That piece of the ISS is now freely floating around in space.

The piece went missing halfway through the seven-hour spacewalk. The two worked on installing a protective piece over an exposed gap when Whitson realized she didn't have a shield. Once the frustrated Whitson reported it to Mission Control, ground teams started monitoring the 5-foot object's location. They made sure it wouldn't pose a threat to the ISS's flight path and watched it float away. 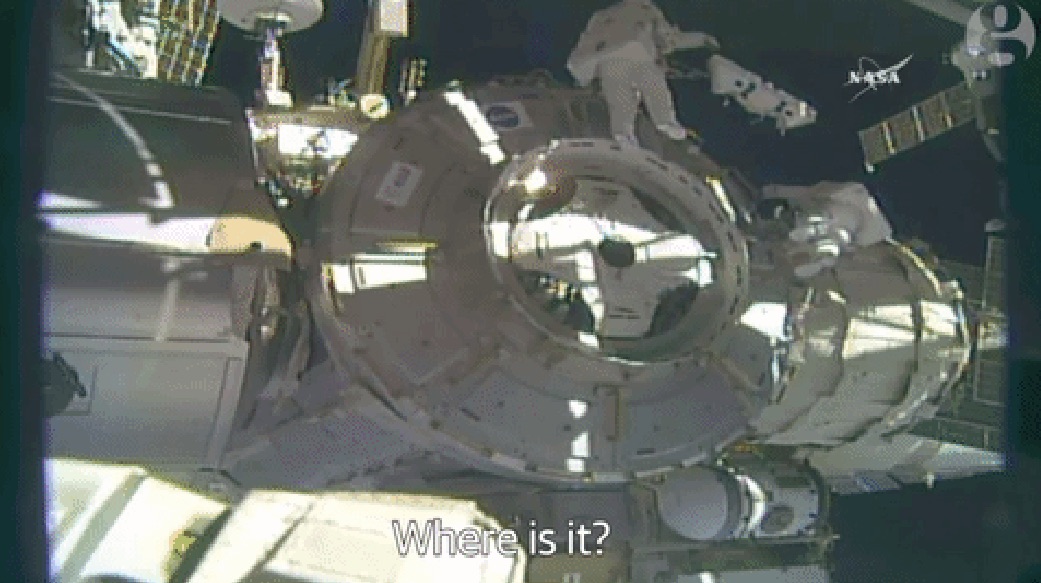 Kimbrough, Whitson and Mission Control developed another way to patch the hole, in true MacGyver style.

The Mission Control team quickly found another way to use a different piece of cloth along with wire ties to make up for the drifting shield.

"You guys came up with a fantastic plan — on short notice. That's amazing," Whitson said over comms.

Astronauts have managed to lose things before. NASA spokesman Dan Huot told The Washington Post "There was one spacewalk where we lost an entire bag of tools."

However, this is the first time something so large has gone missing during a spacewalk. No one knows how the 18-pound shield managed to suddenly float away. Huot praised the quick thinking of the team as well.

"It was spur of the moment, completely unplanned," Huot said. "They got presented with a problem and the ingenuity kicked in."

For now, NASA has indefinitely delayed a spacewalk originally planned for next week, according to the Chicago Tribune. The hold comes not as a result of the shield mishap. Replacement parts are being stalled at Cape Canaveral, Florida due to rocket concerns.

And as for the shield, the ISS and NASA will keep an eye on it, but they don't think it'll cause any problems either in space or on its return to Earth. The shield cover will simply burn up as it reenters Earth's atmosphere. But for now, the shield will float around with the over 100,000 other pieces of space junk floating around larger than 5 cm. The U.S. Space Command's Joint Space Operations Center even tracks over 22,000 objects as they orbit earth unaccompanied.

So, the next time you goof up at work, just remember -- even astronauts have rough days.