Rather than take pictures of the Milky Way, astronomer Mark Heyer decided to capture it in a completely different art form.

While most astronomers love capturing unique and stunning images of the Milky Way, one astronomer wanted to capture the galaxy in a unique way. Astronomer Mark Heyer expressed how the galaxy moves in the musical composition "Milky Way Blues."

This is no Vivaldi's "Four Seasons," as the music isn't simply inspired by the galaxy's sounds; it is the galaxy's sounds. The University of Massachusetts Amherst professor created an algorithm that transformed the data into a series of notes.

“This musical expression lets you ‘hear’ the motions of our Milky Way galaxy,” he says. “The notes primarily reflect the velocities of the gas rotating around the center of our galaxy.”

Heyer assigned notes to the atomic, molecular and ionized gases that can be found between the stars in our galaxy. He then gave different pitches, tones and note count to the velocity and spectra of each gas phase. For example, atomic gases were given an acoustic bass sound, molecular gasses got woodblocks and piano, and ionized gases became saxophone notes.

“Astronomers make amazing pictures, but they’re a snapshot in time and therefore static. In fact, stars and interstellar gas are constantly moving through the galaxy but this motion is not conveyed in those images. The Milky Way galaxy and the universe are very dynamic, and putting that motion to music is one way to express that action.” He chose to compose this piece using a pentatonic scale – with five notes in the octave instead of seven – and in a minor key, because “when I heard the bass notes it sounded jazzy and blue,” he said.

Heyer collected the information for his algorithm by studying 20 years worth of radio telescope observations. The astronomer noted he'd always had a passion for music, and the resulting composition was a long-time goal of his.

"I love music," the researcher said, "So I do this for fun. I’ve had this idea for 25 years, but I never acted on it because I would have had to hire an orchestra to hear what it sounded like."

Heyer found his opportunity when his brother told him of a composition software that made musical scores based on information created for an algorithm. Heyer then went to work. 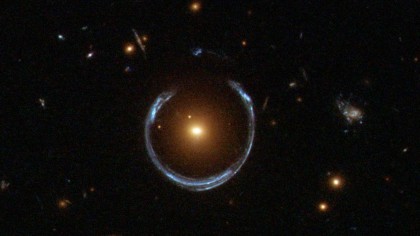 He partnered with Greg Salvesen of the University of California, Santa Barbara to bring additional visuals seen in the video above into the mix.

"I can’t give him enough credit; at one point I was stuck when developing a useful visualization to complement the music and he created a more informative and interesting animation," Heyer said of Salvesen's work.

Heyer admits that he is not the first astronomer to pair music with the natural tones of the universe. Scientist Marcus du Sautoy partnered with composer Emily Howard to create music based on various mathematical proofs. There have even been attempts to take information from the ATLAS detector and shape them into various compositions. (Those tunes are significantly different from the Heyer's jazz.)

"I am certainly not the first astronomer to play around with the idea that music can be found in the elements of the universe," Heyer said. "Johannes Kepler 400 years ago wrote ‘Harmonies of the World’ that described the elliptical orbits of planets around the sun and assigned musical notes based on orbital velocities. More recently, several groups have created sonification of scientific data. Greg Salvesen’s website, Astronomy Sound of the Month, offers a platform for such musical efforts."

Heyer said his compositions are just a fun way to pair a love of space with a love of music -- and hopefully, a new way for people to think about our expansive galaxy.

"You can just enjoy my compositions for the music, but if you want to follow the astronomy, that is there for you to learn about, too," he noted. "It’s just a cool and different way to appreciate the two together."

A New Breakthrough Has Transformed Our Understanding of Black Holes