The detection of a turbulent solar flare in a young star is providing clues about exoplanet formation.

A group of astronomers based at the University of Warwick have observed activity from a relatively small exoplanet which has them baffled. It's part of a race to identify and better understand planets orbiting other stars besides the Sun.

Big Flare in a Small Package

The stellar flare observed by the astronomers is striking in the sense that (1) it's the largest of this kind seen in a younger star, (2) whether the flare's UV radiation will have a positive or negative outcome is uncertain, and most crucial, (3) the explosive behavior could impact nearby planet formation by surrounding planetary matter with x-rays.

The name of the little troublemaker in question is NGTS J121939.5-355557, a young M-type star which is located roughly 685 light-years away from our planet. The activity occurs because of shifts in the magnetic field which results in a massive energy release.

Though the phenomenon of gravitational contractions is normal, it's surprising to witness this in a pre-main-sequence (PMS) star, which means that it hasn't reached full size. Scientists observed the rare behavior from their Next-Generation Transit Survey (NGTS) telescope array in Chile.

The satellite, which was created for the sole purpose of finding exoplanets, picked up some of the light and rays emitted during the stellar flare. University of Warwick Ph.D. student and study co-author James Jackman explains how this activity disrupts our understanding of PMS star behavior:

“This is an incredibly young star, only about 2 million years old. You’d call it a baby – it’s going to live for tens of billions of years, so it’s in the first one percent of its lifetime.

Even though it’s much cooler than our Sun by about 2000 degrees it is roughly the same size, but pretty large for an M star. This is because it’s still being formed from gas in the disc and contracting and cooling until it reaches the main sequence, staying at a certain radius and luminosity for billions of years."

Explaining the Deviation in Behavior

According to University of Warwick Ph.D. student and study co-author James Jackman, the observation has opened up many new questions about the behavior of distant stars. 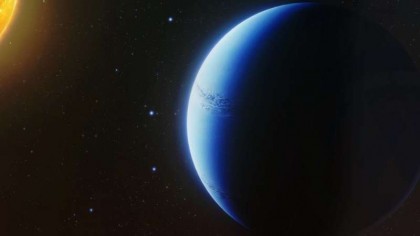 "This is normally a star that shows little activity and stays a constant brightness. Then, on this one particular night, we saw it suddenly grow seven times brighter than normal for a few hours, which is pretty extreme. And then after that, it goes back to normal."

"We see these types of flares on the Sun, but no-where near as big as this. On our Sun, you can do incredibly detailed studies on this kind of activity. It’s difficult to extend that understanding to other stars because the data we need hasn’t been available until now."

What we have here is a clearer and more complete picture of stellar flares, thanks to large undertakings like the Gaia mission, which kicked off earlier this year.

Details about the study appear in a paper, titled "Detection of a giant flare displaying quasi-periodic pulsations from a pre-main-sequence M star by the Next Generation Transit Survey", which was published December 21st in the Monthly Notices of the Royal Astronomical Society (MNRAS) journal.