A new orbiting object exists beyond Neptune, and researchers are theorizing that it could be a sign of Planet Nine -- a planet 10 times Earth's weight.

Sorry, Pluto, but there might be another ninth planet in our solar system.

New research from astronomers details a small, rocky object beyond Neptune that exhibited movement as if it was being pulled by a large planet.

The rock itself is known as 2015 BP519, and it's connected to the mysterious "Planet Nine." 2015 BP519 orbits at such a way that's very distinct from other planets found in our solar system. And it's enough to have astronomers theorizing that the "Planet Nine" originally discussed in early 2016 could have over 10 times the mass of Earth. The impressive weight and scale of the planet would also give explanation as to why the orbiting object moves in the patterns that it does.

"We also consider the long term orbital stability and evolutionary behavior within the context of the Planet Nine hypothesis, and find that 2015 BP519 adds to the circumstantial evidence for the existence of this proposed new member of the solar system," read the abstract of the paper, which is available now on preprint website Arxivand has been submitted to The Astronomical Journal.

Researchers have been on the hunt for Planet Nine since 2016. Two astronomers noticed a group of distant objects moving the sun at angles not found on other planets in our solar system.

This is exciting news for researchers -- but it doesn't come without its share of skeptics.

"It's not proof that Planet Nine exists," David Gerdes, an astronomer at the University of Michigan who helped write the paper, told Quanta. "But I would say the presence of an object like this in our solar system bolsters the case for Planet Nine."

The authors of the paper noted that this particular object is the "most extreme" Trans-Neptunian Object. It's the weirdest orbit scientists can detect beyond Neptune. 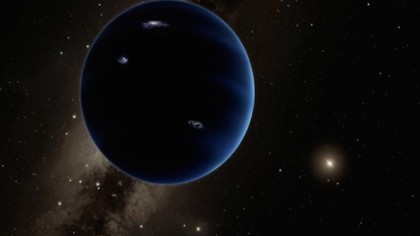 "Finding a 10-Earth-mass planet in our own solar system would be a discovery of unrivaled scientific magnitude," Gregory Laughlin, an astronomer at Yale who was not involved with the research, told Quanta.

Astronomers Konstantin Batygin and Mike Brown are the two  who first spotted evidence about the flying objects. In previous interviews, Batygin noted there were five parts suggesting that the Planet Nine exists.

"If you were to remove this explanation and imagine Planet Nine does not exist, then you generate more problems than you solve. All of a sudden, you have five different puzzles, and you must come up with five different theories to explain them," he said in a statement.