Yale scientists have identified a galaxy that has almost no dark matter, that could help astronomers understand space.

Scientists have discovered a galaxy with almost no dark matter. Dark matter is a confusing area of astrophysics but it is generally agreed upon that dark matter is a requirement of the existence of galaxies.

Diffuse galaxy, NGC 1052-DF2, is missing most, if not all, of its dark matter. The galaxy contains at most 1/400th the amount of dark matter that astronomers had expected! So, what's going on here? https://t.co/TYsNDGbmqq pic.twitter.com/j1ucXvxgYs

This theory is being put to the test by this latest discovery of a galaxy, called NGC1052-DF2 that appears to have almost no evidence of dark matter.

"Finding a galaxy without dark matter is unexpected because this invisible, mysterious substance is the most dominant aspect of any galaxy."

"Finding a galaxy without dark matter is unexpected because this invisible, mysterious substance is the most dominant aspect of any galaxy," said Pieter van Dokkum from Yale University, lead author of the paper on the discovery.

Missing both stars and dark matter

The galaxy is about 65 million light-years away in the constellation of Cetus and is about the same size as the Milky Way. NGC1052-DF2 isn’t just missing dark matter it also only has about one star for every 200 found in the Milky Way.

In fact, it is so thinly populated that scientists can see right through it to galaxies behind it. The lack of stars means NGC1052-DF2 has a very low mass, its total mass matches with its observed mass.

This is highly uncommon for galaxies. Usllay galaxies have a larger mass than can be accounted for just by the ordinary matter inside them. "For decades, we thought that galaxies start their lives as blobs of dark matter. After that everything else happens: gas falls into the dark matter halos, the gas turns into stars, they slowly build up, then you end up with galaxies like the Milky Way. NGC1052-DF2 challenges the standard ideas of how we think galaxies form," said van Dokkum.

The discovery of NGC1052-DF2 will hopefully go a long way in the future study of dark matter, which sounds odd, but its lack of dark matter will help scientist understand why it occurs in other places.

The galaxy had been imaged before but on second look, the team noticed it looked very different from other imaged galaxies. “It looked like a diffuse blob sprinkled with very compact star clusters,” said co-author Shany Danieli, a Yale graduate student. 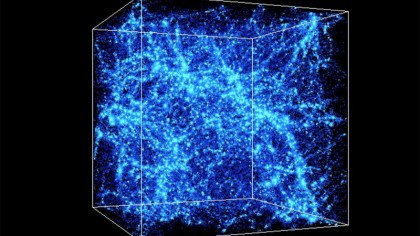 “I love working with the Dragonfly telescope, as it shows us faint structures that no one has even seen before.” To follow up on their observations the researchers used the W.M. Keck Observatory in Hawaii to measure the movement of dense groups of stars called globular clusters.

They discovered the clusters were moving at much slower speeds than clusters in galaxies where dark matter is present. They then calculated the mass of the galaxy.

“If there is any dark matter at all, it’s very little,” van Dokkum explained. “The stars in the galaxy can account for all the mass, and there doesn’t seem to be any room for dark matter.”

“The stars in the galaxy can account for all the mass, and there doesn’t seem to be any room for dark matter.”

To develop more understanding of the unusual galaxy, the researchers then used both NASA’s Hubble Space Telescope and the Gemini Observatory in Hawaii. “I spent an hour just staring at the Hubble image,” van Dokkum said. “It’s so rare, particularly these days after so many years of Hubble, that you get an image of something and say, ‘I’ve never seen that before.’

This thing is astonishing, a gigantic blob that you can look through. It’s so sparse that you see all of the galaxies behind it. It is literally a see-through galaxy.”

Their findings have been published in the journal Nature.