Analyzing the data from a galaxy 13.2 billion light-years way, scientists discover that star formation in the Universe began only 300 million years after the Big Bang.

New research by an international team of astronomers suggests that stars may have been forming—and dying—as early as 300 million years after the Big Bang.

The Origins of Interstellar Dust

Researchers, according to a newly published study in Astrophysical Journal, have analyzed radio signals from a galaxy 13.2 billion light-years from Earth and discovered that stars might have been forming and going supernova as early as 300 million years after the Big Bang.

SEE ALSO: WOMAN SUES NASA FOR OWNERSHIP OF MOON DUST GIFTED TO HER BY NEIL ARMSTRONG

Radio signals from MACS0416_Y1, one of the oldest galaxies in the Universe located in the constellation Eridanus, reveals a large cloud of interstellar dust that standard models can’t explain. Being a very young galaxy, it should be relatively free of interstellar dust—the opposite of what the researchers observed.

"Dust and relatively heavy elements such as oxygen are disseminated by the deaths of stars," said Yoichi Tamura, associate professor at Nagoya University and the lead author of the study, "Therefore, a detection of dust at some point in time indicates that a number of stars have already formed and died well before that point."

What is Interstellar Dust

Interstellar dust is the product of the supernova of dying stars. After a star fuses all of its hydrogen into helium and heavier elements like carbon and oxygen deeper in the stellar core, the star explodes spectacularly in a supernova, ejecting all of these elements into space as interstellar dust.

This process is how these elements are produced in the Universe. From the carbon atoms that make up life as we know it—from lowly amoeba to the advanced system of neurons that give rise to human consciousness—to the life-sustaining oxygen that we breathe, were all produced inside of some star that went supernova.

But stars normally take billions of years to burn through their hydrogen fuel; our sun is about 4.5 billion years old and has a couple of billion years left before it dies out, for example. For a 600 million-year-old galaxy to have produced large clouds of stardust means that stars had to have formed and burned out long before that, about 300 million years, to be more precise.

What a 13.2 Billion-Year-Old Cloud of Interstellar Dust Says About The Early Universe

Using the Atacama Large Millimeter/submillimeter Array radio telescope in Chile, Tamura and his colleagues picked up the faint signal of radio emissions from the dust cloud in MACS0416_Y1, 13.2 billion light-years away. Since light moves at a constant, but finite, speed, the light we see at a given distance is the light emitted from some point in the past, not how things are currently. 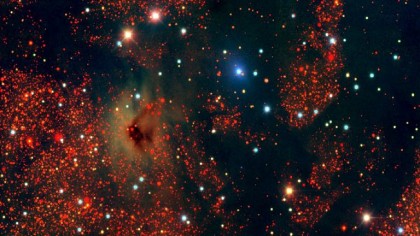 "Dust is a crucial material for planets like Earth," said Tamura. "Our result is an important step forward for understanding the early history of the Universe and the origin of dust."