Scientists detected a cloud-free planet dubbed hot Saturn. The discovery will allow them to probe for elements such as water and carbon monoxide.

By  Loukia Papadopoulos
May 10, 2018
Engine House/University of Exeter

In a new study published in Nature journal, a team of astronomers from the University of Exeter revealed they have detected an exoplanet with a cloud-free atmosphere. The team led by Dr Nikolay Nikolov named the planet 'hot Saturn' WASP-96b.

WASP-96b is a planet similar to Saturn in mass but bigger than Jupiter by 20%. The planet is a 300K hot gas giant that transits a sun-like star 980 light years away in the southern constellation Phoenix.

The team used Europe's 8.2m Very Large Telescope in Chile, to study hot Saturn when it passed in front of its star to determine the planet's atmospheric composition. What they witnessed was spectral characteristics belonging to the complete fingerprint of sodium, a phenomenon that only occurs in cloud-free planets.

"We've been looking at more than twenty exoplanet transit spectra. WASP-96b is the only exoplanet that appears to be entirely cloud-free and shows such a clear sodium signature, making the planet a benchmark for characterization,” said Nikolov, who is also the lead author of the study, in a press release.

"Until now, sodium was revealed either as a very narrow peak or found to be completely missing. This is because the characteristic 'tent-shaped' profile can only be produced deep in the atmosphere of the planet and for most planet clouds appear to get in the way".

The presence or absence of clouds and hazes is crucial to the energy budget of planets’ atmospheres. "It is difficult to predict which of these hot atmospheres will have thick clouds. By seeing the full range of possible atmospheres, from very cloudy to nearly cloud-free like WASP-96b, we'll gain a better understanding of what these clouds are made of; " explained Professor Jonathan J. Fortney, study co-author, based at the Other Worlds Laboratory (OWL) at the University of California, Santa Cruz (UCSC). 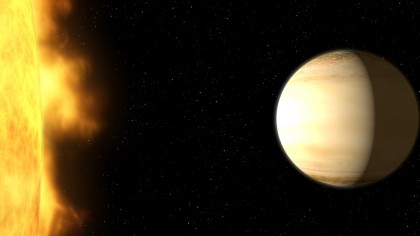 The team was also successful in measuring the level of sodium in the atmosphere of the planet and found results similar to our own Solar System. Sodium is the seventh most common element in the universe, is vital to life on earth and comprises one-thirtieth of our planet's crust.

Being able to detect Sodium on other planets could be crucial both for looking for proof of alien life and for investing in a future home for humans. The study extends beyond Sodium though.

A cloud-free atmosphere means scientists can probe for other elements typically hidden by clouds. "WASP-96b will also provide us with a unique opportunity to determine the abundances of other molecules, such as water, carbon monoxide and carbon dioxide with future observations," added co-author Ernst de Mooij from Dublin City University.

Nikolov’s team will use NASA’s Hubble Space Telescope and the upcoming James Webb Space Telescope to continue their WASP-96b probing project. With clear skies ahead, the possibilities of what they could find are endless.