The discovery made by Oklahoma-based researchers marks the first time in history that a planet outside of the Milky Way has been confirmed.

By  Shelby Rogers
Feb 03, 2018
Gravitational lensing distorts light from a distant blue galaxy to wrap around the luminous red galaxy ESA/Hubble and NASA via Wikipedia

For the first time in history, researchers have discovered and identified planets in other galaxies.

A team of researchers from the University of Oklahoma made the discovery beyond the Milky Way. Led by Xinyu Dai, an OU physics and astronomy professor, and postdoc researcher Eduardo Guerras, the team made a discovery through a popular technique called microlensing. This allowed them to magnify the images of trillions of planets over 3.8 billion light-years from Earth.

"This is an example of how powerful the techniques of analysis of extragalactic microlensing can be. This galaxy is located 3.8 billion light-years away, and there is not the slightest chance of observing these planets directly, not even with the best telescope one can imagine in a science fiction scenario," said Guerras. "However, we are able to study them, unveil their presence and even have an idea of their masses. This is very cool science."

There have been a number of other planetary discoveries made using microlensing, but those discoveries are often confined to the Milky Way. For example, in May 2017, a South Korean team of astronomers discovered a binary star actually made up of two brown dwarf stars. This was only the third binary detected using microlensing, which allowed the researchers to study objects that emitted little to no light at all.

In short, microlensing uses the light from a background source that's bent by the gravitational field of a foreground lens in order to create brighter images. Microlensing also taps into Einstein's General Theory of Relativity. He mentioned that when light from a star gets closer to another star on its way to an Earth-bound observer, the gravity of the middle star bends the light rays. This gives the illusion that the two stars are actually farther apart than they naturally are. 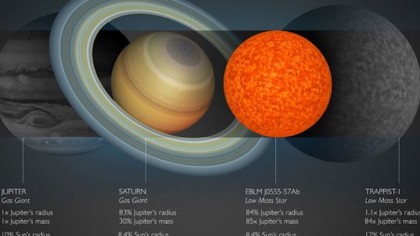 However, the Oklahoma-based researchers found that the gravitational effect of smaller objects can create a bigger magnification. This leads to signatures which can then be modeled and applied to other galaxies. In order to make the discovery, the OU researchers used NASA's Chandra X-ray Observatory at the Smithsonian Astrophysical Observatory. They then crafted the microlensing models at OU's Supercomputing Center for Education and Research.

And, as Phys.org pointed out in its coverage of the discovery, "until this study there has been no evidence of planets in other galaxies."

"We are very excited about this discovery. This is the first time anyone has discovered planets outside our galaxy," echoed Dai in a press release. "These small planets are the best candidate for the signature we observed in this study using the microlensing technique. We analyzed the high frequency of the signature by modeling the data to determine the mass."

The paper can be found in full in the most recent issue of the journal Astrophysical Journal Letters.