For years, these giant explosions have been a total mystery. With new mathematical models, scientists may have discovered what causes them.

The universe is full of amazing and beautiful phenomena and astrophysicists and astronomers have looked to the stars for inspiration for thousands of years. Some of these events are hard or even impossible to spot with the naked eye: black holes, for example, cannot be observed directly, because when light approaches them, it is sucked in and never makes it to Earth for us to observe. Astrophysical jets, however, are observable here on earth, and they create beautiful and impressive explosions... and then the jet continues on as if nothing happened. These jets extend for millions and millions of light years and can be measured using radio technology, but the plumes that interrupt them can be seen with simple telescopes due to their extreme size and heat.

These beautiful space explosions have been a long standing mystery in the astrophysics community for years as scientists struggled to find what causes relativistic jets to suddenly explode into massive, fiery plumes. Because of their distance and extreme size, studying them can be difficult. But now, mathematical models based on the jets' probable composition might lend a hand in learning more about them and solving other difficult problems in astrophysics.

What exactly are astrophysical jets?

Good question. From the Wikipedia page: "An astrophysical jet is an astronomical phenomenon where outflows of ionized matter are emitted as an extended beam along the axis of rotation."

Unless you're an astrophysicist, it is very likely that those words mean nothing to you. Essentially, astrophysical and relativistic jets are massive intergalactic streams caused by particles being "fired" from supermassive black holes at the center of galaxies. These particles use the black hole as a kind of celestial sling-shot to get them near the speed of light -- most particles that approach black holes are sucked in, so these particles have to be traveling at exactly the right angle, in exactly the right position, to be capable of launching off into space. The same idea is used in local astronautics, where probes and satellites will be flung around earth or other local bodies in order to gain speed towards their target. Supermassive blackholes offer the perfect slingshot due to their extreme gravity, and the fact that they draw in matter and energy from vast distances means some particles are bound to be in the sweet spot to create a jet.

The nature of these jets is still relatively uncertain; there are many working theories as to what they might be composed of. It is generally accepted that the particles are in a bundle, flying across the universe near the speed of light and shedding a ton of energy as they go. They act as if they are moving through a small pipe, and centrifugal force causes the inner-most particles to end up further out than the outer-most particles. And then, they explode in giant, amazing plumes of light.

For a long time, scientists couldn't figure out why this amazing phenomenon occurred. Its observation was performed by astrophysicists using extended radio technology, and at the time there was no way to model their path or the activity inside the jet, primarily because there were no good theories as to what the jets were composed of.

Now, astrophysicists may have figured out why these jets act this way. As the particle bundles move forward together through the cosmos, they form a band as if they were moving through a water hose. As the band widens, the link between the particles begins to weaken, and structural collapse of the band becomes imminent. Particles moving at or near the speed of light begin to act unpredictably, so when the boundary of the jet is broken, a lot of particles escape and shed an incredible amount of energy as heat, making the plumes visible with space telescopes and radio technology. These jets are also called "extragalactic jets," which means that they are very far away; the fact that we can detect the plumes based solely on the light and heat emitted means the explosions are very large. 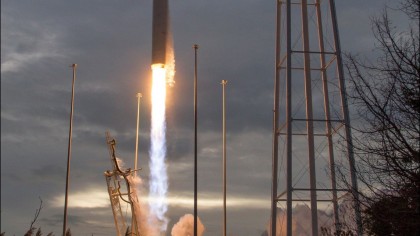 Closer to the center of the band, away from the disruption, the jet stays perfectly stable as if it were the calm eye of a storm. The particles that remain close to the center continue on past the event unaffected, and the ray continues on past the explosion. There must be some kind of force keeping the jets in tact; newer mathematical models are trying to explain why this is possible by using electromagnetic fields, but those models aren't fully developed yet and could take some time.

The Annual Review of Astronomy and Astrophysics published an article in 1998 describing the phenomenon and its implications in the world of astrophysics. The jets aren't just a cool sight to see: understanding them could also be instrumental in unification theories about galactic nuclei. The discovery of what causes these phenomena could help answer those questions posed almost a decade ago.

The jury is still out on exactly what causes these instabilities, even though the mathematical models these scientists created demonstrate what happens after a structural collapse of the jets. Once those models are complete, scientists will be one step closer to unlocking another great mystery of the universe.