Herman Sörgel wanted to change the face of the planet bringing Europe and Africa together, creating the new continent of Atlantropa.

Imagine a world with futuristic cities and renewable energy in abundance. A civilized world where poverty and war are things of the past. Imagine a world where prosperity, harmony, and peace create a healthy environment for all creatures on the planet. That is the vision of Atlantropa; the vision of Munich architect Herman Sörgel's life-long dream. 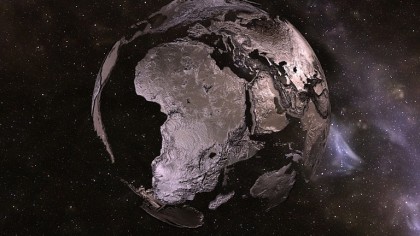 Herman Sörgel wanted to change the face of the planet bringing Europe and Africa together. His plans and futuristic ideas managed to keep the international public fascinated for decades. Sörgel's plans were about building a dam across the cost of the Gibraltar Straits. This gigantic piece of engineering would separate the Mediterranean from the Atlantic. Without the connection to the Atlantic, the water level of the Mediterranean Sea could be lowered.

According to Herman Sörgel's vision, more than half a million of square kilometres of new land would be brought back from the sea. In addition, he planned to seal all the rivers flowing into the Mediterranean, also with dams. As a result, Europe and Africa's energy problem would be solved forever. The water in the dams would generate 110,000 Megawatts of clean electricity. Additionally, this would have an incredibly positive effect on the environment.

Europe and Africa would become one new continent: Atlantropa.

Herman Sörgel pictures himself driving futuristic electric cars over the Mediterranean on a bridge linking Sicily to Africa. Without water, the old harbor cities would lay inland, and new efficient cities would be built along the newly created costline.

The Atlantropa project would unite the 21 neighboring countries around the Mediterranean. The massive dream-project would take 150 years to complete, according to Herman Sörgel's calculations. This would also signify 150 years work for several generations of people.

Herman Sörgel's utopian ideas for the society of the future promised solutions to all the major problems of his times. Atlantropa should become a continent of peace with living space and renewable energy in abundance. It was the 1920s. The world was not ready. Almost 10 decades later, is the world ready today?

Herman Sörgel: The man, the visionary, the dreamer

Herman Sörgel was a pioneering German architect from Bavaria. He was born into a family of architects on April 2, 1885. Sörgel actively promoted his ideas about building a gigantic engineering project, a new continent called Atlantropa resulting from building massive hydroelectric dams, until his tragic death in 1952.

He possessed clever and futuristic ideas well ahead of his time. When he conceived his Atlantropa project, also known as Panropa, his idea was to provide the world with a radical solution to the economic and political turmoil affecting Europe in the early 20th century. Herman Sörgel believed that by building dams across the Strait of Gibraltar, the Dardanelles, and the Congo river between Sicily and Tunisia it would be possible to generate enough hydroelectric power for the whole Europe and Africa.

One of the most interesting concepts about Herman Sörgel's idea was that the newly formed independent body would have the authority to discontinue energy to any country that were posing any thread to continental or global peace.

Herman Sörgel died at the age of 67, shortly after having been struck by a car while riding his bicycle en route to a lecture at a German university in Munich. According to data collected at the time, the accident happened on a road "as straight as a die," suggesting that he could have been murdered. The driver of the car was never found.

The vision: Atlantropa's hydroelectrical dam to provide clean energy to all of Europe

In the 1920s, Herman Sörgel's idea called for the building of three dams that would lower the levels of the Mediterranean Sea level. This would allow the generation of enough hydroelectric power to supply the whole of Europe. The idea of providing clean energy in the 1920s at such scale was not very common and therefore questioned.

The challenge: What would it take to build Atlantropa?

By building two dams: one in the Strait of Gibraltar and a second one between Sicily and Tunisia dividing the Mediterranean into two separate halves. A third dam would be built to block the water from the Black Sea from coming through.

The hydroelectric dam would have provided high hydropower for the whole of Europe. The project was estimated to last for 100 years.

Herman Sörgel's idea to lower sea levels would increase the dry land areas around the Mediterranean and provide overland access to Africa. Building a dam in the Congo river would refill the basin surrounding Lake Chad providing fresh water to irrigate the Sahara. It would also provide shipping access to the African interior.

The mass amounts of hydroelectric energy that the dams would be generating, could account for 50 percent of Europe's energy needs at the time. Perhaps one mistake Sörgel made was dreaming up the idea without taking into consideration how other countries would react to the change.

For instance, the land mass of the Levant would increase by 50 percent due to the water levels dropping. Sörgel would also have to go through multiple Middle Eastern countries to get to Africa where most of the major changes would take place.

Herman Sörgel's Utopian goal was to solve all the major problems of European civilization by the creation of a new continent. Sörgel was convinced that to remain competitive with the rest of the world Europe had to become self-sufficient. This meant possessing territories in all climate zones – hence the union with Africa was necessary.

Despite generations during and after Herman Sörgel's were excited about it, the project never gained substantial support. On one hand, due to its fantastic scale and Eurocentric expansionism. On the other, under Hitler's Nazi regime, the plan was ridiculed as it was against the idea of a Eurasian German Empire.

The Italians never understood the potential benefits and never supported the idea, as their cities were so dependent on the coastlines, even though Sörgel had a plan for cities like Venice and Genova. After the Second World War, some considered the idea again, as the Western Allies sought to create closer bonds with Africa and combat communism.

However, the invention of nuclear power, the cost of rebuilding, and the end of colonialism left Atlantropa technologically unnecessary and politically unfeasible. Despite everything, the Atlantropa Institute once created by Herman Sörgel remained in existence until the 1960s.

Herman Sörgel's proposal of a new continent was briefly referred in the second series of The Man in the High Castle.

Perhaps, in a distant future, with emerging technologies making long engineering projects considerable shorter, someone believes the world is ready to give Herman Sörgel's Atlantropa idea a second look.