Imagine having a smartphone so bendable that it makes broken screens a thing of the past. One team of engineers developed a new semiconductor that could make flexible cell phones a reality.

The Australian National University's (ANU) Research School of Engineering department created the semiconductor with both organic and inorganic materials that can convert electricity into light with a very high efficiency.

The compound is incredibly thin and is just one atom thick. The carbon and hydrogen base makes up part of the semiconductor developed by the Australian team. The inorganic compound isn't much thicker; it's just two atoms.

ANU Associate Professor Larry Lu served as the lead researcher for the project. He called the development a "major breakthrough."

"For the first time, we have developed an ultra-thin electronics component with excellent semiconducting properties that is an organic-inorganic hybrid structure and thin and flexible enough for future technologies, such as bendable mobile phones and display screens," said Associate Professor Lu from the ANU Research School of Engineering.

One member of the ANU team was PhD researcher Ankur Sharma. Sharma recently won the university's 3-minute thesis contest with other research. He explained that the experiments used to test the semiconductor proved that the part organic, part inorganic semiconductor would be more efficient than traditional semiconductors made of silicon.

"We have the potential with this semiconductor to make mobile phones as powerful as today's supercomputers," said Sharma of the ANU Research School of Engineering. 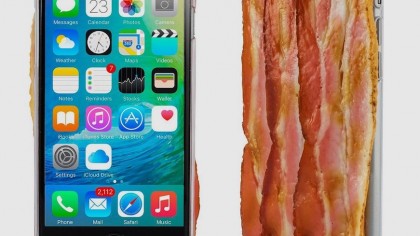 10 of the Strangest, Yet Most Amazing Phone Cases

"The light emission from our semiconducting structure is very sharp, so it can be used for high-resolution displays and, since the materials are ultra-thin, they have the flexibility to be made into bendable screens and mobile phones in the near future."

The team constructed the semiconductor molecule by molecule, they noted in a press statement. The process -- called chemical vapor deposition -- is similar to building a 3D printed structure.

"We characterized the opto-electronic and electrical properties of our invention to confirm the tremendous potential of it to be used as a future semiconductor component," Associate Professor Lu said.

Using the semiconductor in the near future

The super-thin semiconductor would be ideal for screens and other displays on cell phones, the researchers noted. And as screens continue to get bigger and bigger on each new smartphone iteration, having durable screens could become a necessity to save users from scratches or breaks. It could also be used in television screens, gaming systems, or digital signage.

"We are working on growing our semiconductor component on a large scale, so it can be commercialized in collaboration with prospective industry partners."

The thin, flexible surface could also be used in an entirely new series of high-performance electronics, the researchers noted. These electronics could even be biodegradable, making it easy to dispose of gadgets and reduce waste that's currently inconvenient to recycle.

New Method Could Make Charging EV's While Driving a Reality

DNA Could Store Every Tweet, Movie, Book, and More in a Jewelry Box-Sized Device