A study published this week in Science saw researchers from the Department of Energy's SLAC National Accelerator Laboratory use ultrafast electron diffraction to examine gold melting after being blasted by laser light. The experiment resulted in a movie featuring never-before-seen atomic details of the melting process that could lead to breakthroughs in fusion power reactor designs and all other applications requiring materials to withstand extreme conditions.

The film was shot with SLAC’s high-speed electron camera which has a shutter speed of about 100 millionths of a billionth of a second, or 100 femtoseconds. The camera can actually capture the movements of electrons and atomic nuclei within molecules that occur in less than a tenth of a trillionth of a second.

“Our study is an important step toward better predictions of the effects extreme conditions have on reactor materials, including heavy metals such as gold,” said SLAC postdoctoral researcher Mianzhen Mo, one of the lead authors of the study, in a statement. “The atomic-level description of the melting process will help us make better models of the short- and long-term damage in those materials, such as crack formation and material failure.”

The team witnessed an essentially heterogeneous melting on time scales of 100 to 1000 picoseconds that led to a catastrophic homogeneous melting within 10 to 20 picoseconds at higher energy densities. They also discovered evidence of solid and liquid coexistence, determined the Debye temperature, evaluated the melting sensitivity to nucleation seeds and more. 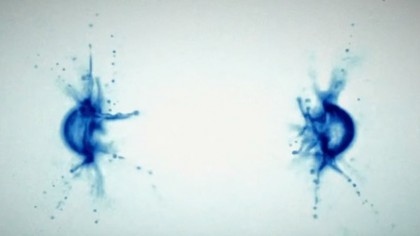 First Ever Footage of Water Droplets Being Blown Up by Lasers

“About 7 to 8 trillionths of a second after the laser flash, we saw the solid begin turning into a liquid,” explained SLAC postdoctoral researcher Zhijang Chen, one of the lead authors. “But the solid didn’t liquefy everywhere at the same time. Instead, we observed the formation of pockets of liquid surrounded by solid gold. This mix evolved over time until only liquid was left after about a billionth of a second.”

The researchers hope that their new data will be useful in building fusion reactors that require materials resilient enough to withstand extreme radiation and temperatures of as much as hundreds of millions of degrees Fahrenheit. “Our method allows us to examine the behavior of any material in extreme environments in atomic detail, which is key to understanding and predicting material properties and could open up new avenues for the design of future materials," said Siegfried Glenzer, head of SLAC’s High Energy Density Science Division and the study’s principal investigator.