While it's not real (just yet), this concept illustration is turning heads online thanks to an Audi-loving designer.

Before anyone gets too excited, note that the following sketches are just that -- sketches. They are Audi-inspired, and while the Interesting Engineering team would love to see them on the road in the future, they are not planned nor commissioned by Audi.

Tesla changed the road shipping game when it announced its semi. And then the company debuted its semi truck, inspiring major companies around the world (i.e. Walmart, UPS) to test out the units as soon as they become available. However, one designer decided to take the electric semi concept and adapt it for a completely different brand. 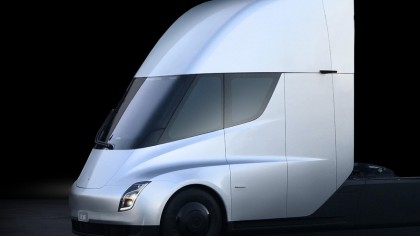 Independent designer Jeremy Dodd crafted an Audi-themed truck and posted the images to his Behance account, drawing the attention of car enthusiasts around the world. While these sketches won't show up on a roadway anytime soon, they're certainly impressive and unashamedly futuristic.

Tesla fans will probably quickly point out why this Audi concept looks so different from the traditional 'boxy' look of other semis. Dodd's designs, while amazing, never have to make it onto a production line and onto roads.

Unfortunately for us, Dodd doesn't go into details regarding the design and inspiration behind the vehicle. Is it fully autonomous? Is it completely electric? Where would one safely put the motor in such a vehicle? Does it offer the same room for the human behind the controls that Tesla does?

Perhaps Dodd will treat fans of this design to a sequel, answering these questions and more in newer art.

Via: Jeremy Dodd via Behance, AutoEvolution