It looks like the 2015 launch of the ‘Tesla Energy' division, and its subsequent development of a spate of solar power and energy storage initiatives has generated considerable industry buzz. The latest one of its competitors to follow in the company's path is Audi with the recent announcement of the creation of its ‘Smart Energy Network'. The goal of Audi's plans, essentially, is to develop a sophisticated—and smart—grid. At present, the company a pilot project is being run with households in both Ingolstadt in southern Germany and Zurich, Switzerland. It will involve testing the results of combining photovoltaic systems of various sizes with stationary storage batteries. They've partnered with a Zurich start-up company, Ampard, who will supply the control software that hopefully will achieve an intelligent distribution of solar power.

"We are looking at electric mobility in the context of an overall energy supply system that is increasingly based on renewables."

The idea is to link automobile, home as well as a power supply in one network, with the added bonus of direct power grid interaction. Dr. Hagen Seifert, Audi's Head of Sustainable Product Concepts shared details in a press statement about the company's ambitious goals: "We are looking at electric mobility in the context of an overall energy supply system that is increasingly based on renewables. We are playing a pioneering role with the prequalification of the balancing-power market – enabling producers to feed power into the grid, as part of the pilot project. That is now for the first time also possible down at the level of individual households, which helps balance the entire power grid."

Elaborating on its plans, Audi also mentioned that as broader goal of achieving "emission-free premium mobility", that the company is "looking at services that extend beyond the automobile as a product."

Although few would disagree with the theory that Audi is taking its cue (and seemingly the vision for the initiative, and R&D scheme too) from Tesla, this is no doubt a case of imitation is flattery. Tesla, in fact, set the standard for other companies to follow in this area, proving that energy storage and electric vehicle development efforts could occur at the same time. One of the most rewarding, and dynamic, expressions of this was Tesla's work to restore power on the island of Puerto Rico weeks after being hit by two hurricanes. 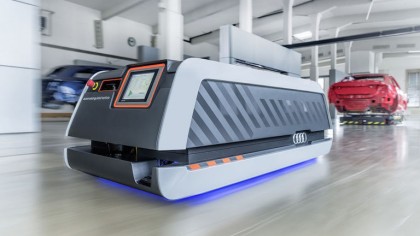 Audi's Smart Factory is A Glimpse Into The Future

We are living in a time in the phrase 'diversification' is being thrown around more than ever, as industry leaders embrace a number of different ventures to create and sustain continued interest in their brand. This type of diversification, however, is one we fully support: it brings with it a forward-looking vision that has the idea of improving the lives of as many people as possible at the core. In Tesla CEO Elon Musk's most telling statement about diversification, which underscores his guiding principle of making sure that people never thought of Tesla as 'just a car company', the message is very clear: "The world does not lack for automotive companies. The world lacks for sustainable energy companies."