An Australian manufacturing company has embarked on an attempt to commercialise a new solar cell that is potentially cheaper and more efficient than current solar cells. The project is being supported by the Australian Renewable Energy Agency (ARENA) which has contributed $449,000 dollars which, according to ARENA CEO Ian Kay, would enable Dyesol, based in New South Wales, to create a roadmap aimed at the commercial production of its new perovskite solar cell technology.

“Perovskite cells have been demonstrated at laboratory scale but have never before been mass produced” said Mr. Kay. “Dyesol will map out the techniques and requirements for working towards scalable manufacturing of high-quality, uniform perovskite cells that achieve efficiency, durability and stability targets. Most current generation solar photovoltaic (PV) panels on the market today are made with silicon, but there is growing interest in developing third generation solar technologies such as cells constructed from perovskite. Perovskite is abundant and cheaper than silicon and there are signs it may be more adaptable than conventional silicon, providing enhanced performance in low light conditions and being better suited for integration into external building components, such as windows and facades.”

Mr. Kay added that ultimately, perovskite solar cells could deliver a significant breakthrough in cost reduction in the manufacture of solar PV, in line with ARENA’s goal of reducing the cost of renewable energy and advancing innovative technologies. Dyesol is initially aiming for a delivery cost benchmark of US 10 cents per kilowatt hour, putting perovskite solar PV cells on a par with current benchmarks achieved by silicon solar PV. This would be a considerable achievement given silicon PV’s maturity as a technology, and provides further scope for reduction in the cost of energy as manufacturing volumes grow. 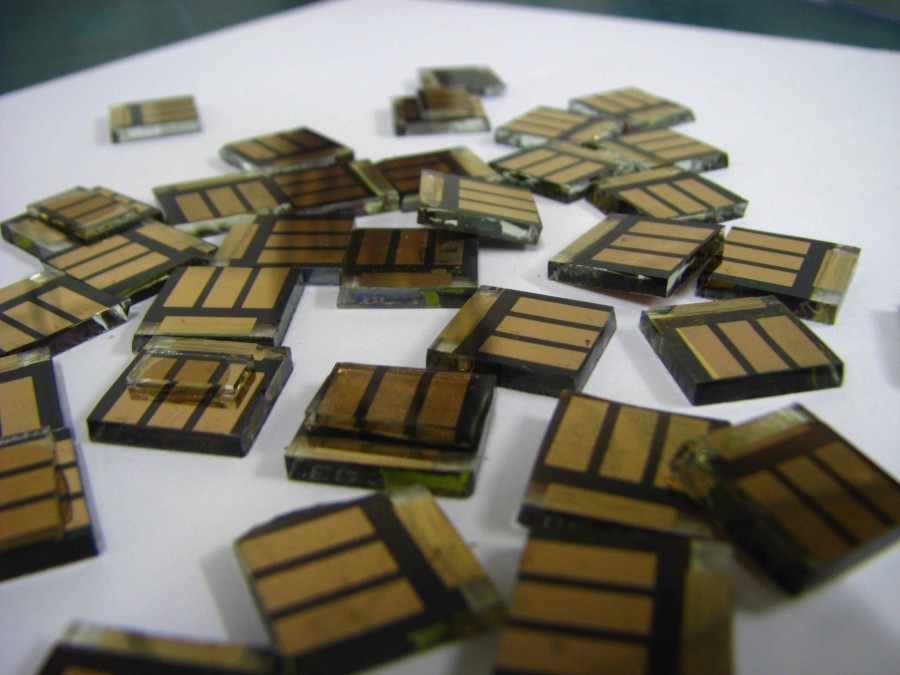 The new solar cell was developed by scientists at Nanyang Technological University (NTU) in Singapore, announced by Dyesol in October 2013. The team then went on to develop a commercial prototype in collaboration with the company. The NTU team was led by Assistant Professor Sum Tze Chien and Dr Nripan Mathews, both of whom worked closely with NTU Visiting Professor Michael Grätzel from the Swiss Federal Institute of Technology in Lausanne (EPFL) who has won multiple awards for his invention of dye-sensitized solar cells. The cells are made from organic-inorganic hybrid perovskite materials via a solution-based manufacturing process, making it five times cheaper than current thin-film solar cells. Perovskite can convert up to 15 percent of sunlight to electricity and this places it in direct competition with thin film which is currently efficient up to 20 percent.

“In our work, we utilize ultrafast lasers to study the perovskite materials” said Asst Prof Sum. “We tracked how fast these materials react to light in quadrillionths of a second (roughly 100 billion times faster than a camera flash). We discovered that in these perovskite materials, the electrons generated in the material by sunlight can travel quite far. This will allow us to make thicker solar cells which absorb more light and in turn generate more electricity.”

Assistant Professor Sum added that this unique characteristic of perovskite is quite remarkable since it is made from a simple solution method that normally produces low quality materials. Another benefit of perovskite is that it can be used to produce solar cells with different translucent colors including red, yellow and brown. This in turn could increase the range of options for architectural design using solar materials.

Perovskite was mentioned by Science magazine as one of the renewable energy breakthroughs of 2013 and there has been a number of significant advancements in the technology since then. Dyesol has been working globally with companies and researchers to develop an international leadership position in this field.

According to Dyesol Chief Technical Officer Dr Damion Milliken, the support provided by ARENA will enable the company to bed down critical manufacturing input materials and techniques necessary for the commercialization of a perovskite solar cell product. It will also be invaluable in accelerating the commercialization of the technology and ensuring Australia is at the forefront of its development.