Reuben Lichter became the first person in the world to have a 3D-printed tibia transplanted into his leg. Lichter has about 18 months of recovery before he'll be able to fully walk again.

By  Shelby Rogers
Sep 11, 2017
This image of a healthy tibia is what Lichter's leg could look like should the 3D printed scaffolding take hold. Samuel Chen/YouTube

Thanks to 3D printing, an Australian man got to keep his leg. Surgeons performed the world's first-ever transplant surgery using a 3D printed bone.

The man, Reuben Lichter of Mudgeeraba, Australia, nearly lost his leg above the knee due to a bacterial infection. Earlier this year, Lichter's tibia started giving him pain. Doctors told him that he had osteomyelitis which infected his entire bone. His tibia started to disintegrate in just months. He had two choices: an experimental procedure using the 3D printed bone, or to lose his leg.

For Lichter, the choice was easy. Speaking to The Sydney Morning Herald, Lichter explained, “[The surgical team] came to me and said there are two options; You can be amputated above the knee, or you can try this experimental stuff that may, or may not work and I said: ‘Bam, do it’.”

Michael Wagels served as the lead surgeon for Lichter's operation. He and his team first drained all the pus and infection from the leg before testing several 3D tibial scaffold options. The scaffold was initially modeled at Queensland University of Technology. Biomedical engineers designed the scaffold to promote bone growth around it and then slowly dissolve over time. To have the body successfully grow around the scaffold, the team introduced tissue and blood vessels from both of Lichter's legs to the scaffold. The surgery itself happened over five operations at Brisbane's Princess Alexandra Hospital.

Lichter has about 18 months of recovery before he'll be able to fully walk again, but he's just happy that he will walk normally again.

"It was not frightening at all […] If there was a chance for me to save my leg and do the things I want to do with my son, then I was going to take it," he said. I wasn’t going to lose my leg without having a fight."

"This is the first time this surgery has been done anywhere in the world," he said. "For me, as the Minister for Health, it is very inspiring to ensure that this world-first surgery happened in Queensland."

"It was very scary," said fiance Caity Bell. "I was by myself, I was a first-time mum and I'd just had my baby and it was just me at home."

Lichter now jokes that his son will more than likely be walking before his father. However, Lichter could be one of the biggest success stories in the age of additive printing.

Lichter's bacterial disease of osteomyelitis affects 2 in every 10,000 people in the United States. In the U.S. alone, nearly 2 million people live with lost limbs, according to the Amputee Coalition. 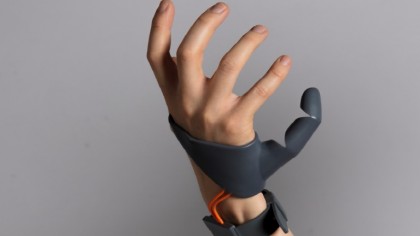 In Lichter's home of Australia, there are over 20,000 amputees with roughly 5,000 new prostheses given every year. Prosthetics have already undergone a 3D printing transformation with programs allowing young children to help design their own prosthetics.

The next major challenge for biomedical engineers is how to successfully 3D print organs. There have been several small-scale applications and studies, but nothing has been successful in humans yet.