In its latest effort to provide training for its personnel, the Australian military has begun to develop VR pressure training.

The Australian military is coming up with a new type of virtual reality (VR) enchanced resilience training, the first time a program of its kind has ever been put together.

In conjunction with this decision, Minister for Defence Industry Christopher Payne recently announced that the $2.2 million project for developing this training will be done with the cooperation of the University of Newcastle (UON) under the assistance of Associate Professors Eugene Nalivaiko and Rohan Walker.

This program will work with an already existing Battle SMART (Self-Management and Resilience Training) method setup by the Australian Defence Force. Using real-world simulations via the VR technology, soldiers will build upon the basics of the SMART program, whose approach “adapts evidence-based cognitive behaviour therapy tools for daily stress management and resilience training.”

The important work will essentially seek to monitor the ways that stress alters the way the brain functions, and in turn, offer the military better strategies to help soldiers cope with stressful situations. Using this information, their superiors can not only make necessary adjustments but also decide whether the soldier would be ready for deployment.

Walker identified two important factors that affect how soldiers may perform under pressure:

"Firstly, cognitive reframing, which involves identifying and then disputing irrational thoughts. Reframing is taking a step back and objectively looking at the scenario to find positive alternatives.

"The second is tactical breathing. Although it may sound simple, breathing is key as it is the only thing we can regulate under pressure.When you’re breathing properly, respiration and heart rate are controlled and you have high levels of cognitive flexibility to make better decisions."

All of this implies that the task of the VR program will be to rewire the brain’s responses in situations the soldiers are aware of, but may not have experienced until that time. 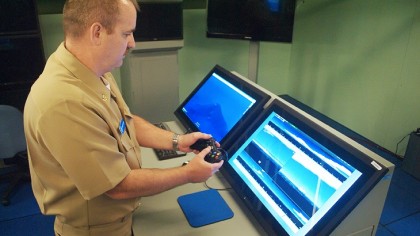 The U.S. Navy Plans to Use Xbox 360 Controllers for Its Most Advanced Submarines

Nalivaiko elaborates on the stresses that soldiers undergo and how VR technology addresses this need:

“What tends to be challenging is where difficult experiences are beyond the individual’s ability to control them...It’s imperative our troops are forearmed with strategies to ensure they remain in control of the situation and are equipped with the skills to make a level-headed decision.”

Perhaps the most significant part of this new program is that biometrics will be used for calculating responses and analyzing outcomes. Professor Walker explains how having reliable data at their disposal will be critical for the military:

“It can be difficult to test for cognitive resilience when subjects have to be the judge of their own ability. There can be multiple factors at play like being unsure of their own limits...the benefits of utilising a virtual scenario test to simulate your response are huge, but one major factor is that we can provide an accurate picture of where a trainee is at in the testing and how well they have responded to the simulated scenarios.”

This important partnership is proving once again that the potential for VR is unlimited. Given the time and necessary support, the technology will continue to reach into unexplored territory.

Via: Army, University of Newcastle