An Australian boarding school in Queensland is trying out Tesla's much-talked-about Powerpack and the corresponding converter. The trial period is one of several power projects developed by Tesla in order to push the limits of their power technology.

By  Jessica Miley
Aug 31, 2017
Part of the Tesla System at the Rockhampton school Tesla via YouTube

A new Tesla Powerpack project has been launched in Rockhampton, Queensland, Australia. Just one Powerpack was installed alongside Tesla's own commercial inverter. The project comes as a display of just how flexible the company's power tech can be.

The school's Powerpack comes on the back of the company’s other huge Powerpack projects like the 100 MW/129 MWh energy storage system announced in South Australia. It also overlaps with the company's solar + Powerpacks project powering Kauai in Hawaii. This small but important project serves as a reminder of just how flexible and Tesla’s energy storage products can be.

While these large projects provide energy on a utility scale by configuring hundreds of Powerpacks together with commercial battery inverters, smaller projects can achieve sustainability and economy under the right conditions for the right enterprise. These smaller projects use the Tesla’s Powerwall 2 usually reserved for the domestic market. When nine of these units are combined they can produce a useful capacity of up to 121 kWh. For the Rockhampton project, just a single Powerpack was used but was boosted with a higher capacity commercial inverter. Tesla described the project saying, “The Cathedral College in Rockhampton, Queensland is the first school in Australia to Tesla Powerpack store sustainable energy generated from solar during the day to power the boarding house during the evening and into the morning."

The boarding school was eager to use a green energy supply though they faced the problem that the main power usage of the institution happens in the early morning, late afternoon and throughout the night when solar power doesn’t generate enough energy. To solve the supply and storage problem, the school hired GEM Energy Australia to build them a solar array and went to Tesla to create a way for them to store the solar generated energy for use at necessary times.

General Manager for GEM Energy Australia, Benjamin Kölle, spoke at an energy conference in June and explained their design.

"Exploring all different battery types and inverters, the solution we have implemented is 80.08kW of Q.CELLS Q.PLUS BFR-G4.1 280w with SolarEdge inverters with a Tesla Powerpack battery setup which includes 95kWh of usable storage and a 50kW Tesla battery inverter," he said. "We chose this combination because of the performance, space requirements and cost effectiveness."

Tesla estimates the school should see a return on their investment of single Powerpack system within six years. GEM says the school will need just seven years to experience the pay back of the entire system including the solar arrays. 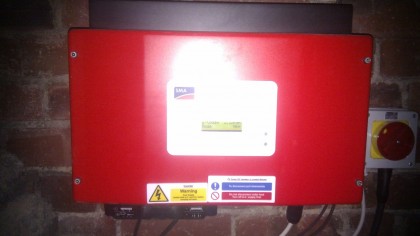 Tesla released a video (which is linked earlier in this story) of the project highlighting how the news system is now providing the school with more than 60 percent of its energy. The Australian National Renewable Energy Laboratory has released a report encouraging the use of solar in combination with energy storage as a way to increase revenue and capacity. It is important for the technology to remain flexible so the right solution can be found for each individual case based on energy requirements, storage space, and costs. Costs of energy storage batteries is also helping with the push toward solar + storage a more affordable and flexible option for both domestic and commercial properties.