Dr. Tim Heard, through his research and documentation efforts over the years, is determined to increase public awareness about the truly unique sugarbag honeybee.

The “discovery” of places or living things in nature about which very little is known or reported seems to pique our interest. This is perhaps because they are usually things that are existing or occurring right under our nose.

One delightful example comes from Australia-based entomologist Tim Heard, who has been spreading the word (creating a buzz seemed like an unfortunate phrase to choose in this instance) about sugarbag honey bees.

Heard is also a former scientist with the Commonwealth Scientific and Industrial Research Organisation, based in Canberra, and started documenting the fascinating creatures over thirty years ago. 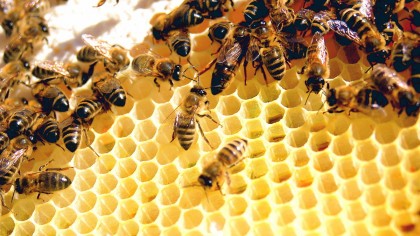 Bee colonies are disappearing, be prepared to save them.

With the aim to educate the public, Heard created a comprehensive website that provides visitors all the information they need to learn more about the stingless bees, which Heard adds are “highly social insects, with one queen and thousands of workers who live together in a protected place, which, in nature, is usually in a hollow tree.”

They “inhabit the northern parts of Australia, although on the east coast they reach a bit further south than Sydney[, and occur in other tropical parts of the world[, while t]he Australian species are much smaller than European honey bees.”

Beyond the biological classifications (Tetragonula carbonaria), and providing a brief bit of info about their habitat and size relative to other bees, Heard gets to the most incredible aspect of the bees: the unique hives they build.

The Spiral Design of the Bee Hive

The hives do not resemble those found in other bee populations in a number of ways:

• The hives have an intricate, clockwise spiraling design.

• Each hive features only one entrance.

• The hive entrances are coated with a pathogen-blocking sticky layer, an extra line of defense for the bees which, according to Heard, “do not have a sting although they can give you a little bite with their jaws.”

Heard maintains as many as 400 of the hives at a time and says that the shape is most likely created out of necessity to protect the integrity of the core of the hive: “What we're looking at is the advancing front of a stingless bee colony,” he says, adding, “In the middle of the spiral, you have to construct cells that move with the change.”

Some scientists also offer up the theory that the shape creates better conditions for air circulation.

Of course not satisfied to merely provide info about the unique bees, Heard discusses the best ways to raise and cultivate your own little sugarbag honeybee population, and in his book, The Native Bee Book: Keeping Stingless Bee Hives for Pets, Pollination, and Sugarbag Honey, he goes into even further detail about dividing, transporting and maintaining hives.

The most compelling stories about scientists involve cases, much like Heard’s, in which one’s life work and one’s life mission become one in the same. Few are lucky enough to achieve this kind of fusion of vision and purpose, and it appears that Heard is indeed one of them.

How to make small roads with RC construction vehicles