The wreck of Australian warship SS Macuma has been found by scientists after being lost for 74 years. The remains of the boat were rediscovered using sonar scanning technology.

By  Jessica Miley
Oct 08, 2017
The wreckage of SS Macumba, found after 74 years. CSIROScope

A ship missing for 74 years off the coast of Australia has been found. The boat, SS Macumba, was attacked in August 1943 by Japanese aircraft. The enemy planes managed to target the ship's engine room causing massive damage. Three seamen were killed in the battle while the remaining crew was rescued by an escort. The sinking ship was abandoned and its exact resting place was unknown for 74 years.

The boat was discovered by scientists from the Commonwealth Scientific and Industrial Research (CSIRO) aboard the ship, the RV Investigator. The team made the discovery doing a survey of the sea floor early on Wednesday morning. The Northern Territory Tourism captured glimpses of Macumba on infrared cameras and showed the boat almost entirely intact. The search for the missing boat was a collaboration between CSIRO and Northern territory Tourism commission.

The CSIRO released a statement saying, "The search was important to everyone on board this voyage and a lot of eyes were either glued to monitors or scanning the horizon for the signs of marine life that often point to features underwater. We discovered the wreck in the middle of the night after about 10 hours of searching, which was lucky as we only had a couple more hours available for the search. It was also really lucky that we had an excellent team on the sonar who noticed some unusual features on the seafloor near the edge of our search area and asked for the ship to do an extra wide turn outside the search area. That's when we found it!"

The boat is most likely home to a healthy and bountiful ecosystem now as it formed into a reef for the local wildlife. The crew confirmed the wreck was home to at least some exciting sea animals when it launched a drop camera overboard. The camera managed to capture some footage of a reef shark hanging out at the wreck and appearing to guard its territory.

The team will now do some further investigations into the condition of the wreck and consider the best way forward to preserve this significant natural and historical site. 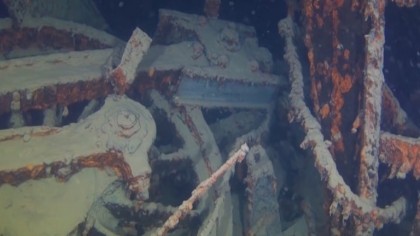 The northern part areas of Australia came under attack several times during World War II. The largest attack was mounted by Japan in February 1942. This battle, known now as the Bombing of Darwin, is still the biggest attack by a foreign country on Australia’s own territory. During the battle, 242 Japanese aircraft attacked the city of Darwin in Australia's Northern territory. The planes were targeting key naval ships docked in the harbor as well as other strategic locations. The aim of the attack was to prevent the Allies using Darwin as a base in their invasion of Timor and Java. The Japanese Air Force inflicted serious damage on Darwin with little damage to their own crews. The ferocious attack managed to destroy the cargo shipping operation that was supporting the war in Java, Timor and the Philippines. Almost half of Darwin's population was evacuated during the raid.

Ernest Shackleton’s 107-year-old Endurance is discovered, crushed below the Antarctic