There is still no firm date when Roborace, the autonomous electric racing league, will kick off. It's flagship vehicle is on display this week at CES.

Roborace is the latest in Autosport. The driverless electric AI centered racing league features super high-powered cars with incredible artificial intelligence capabilities. The race is designed to put Artificial Intelligence engineers against each other to see who can develop the software and algorithms to get the best results. To make sure it is a level playing field each team races the same car, dubbed the Robocar. This futuristic looking all-electric Formula 1 style car is designed by Daniel Simon. Simon is a former Bugatti designer who has also created some of Hollywood’s most iconic vehicles for movies such as Tron: Legacy and Captain America. Robocar has 4 electric motors, 15 sensors, 6 computer vision cameras, and front and rear radars. Each car is powered by NVIDIA technology for self-driving cars. The high-tech racing machine can reach speeds of over 300 kilometers per hour.

The future league will be made up of teams that include OEMs, universities, mobility companies, and even traditional racing teams. Each team cannot change or enhance the hardware of the car instead must rely on their AI prowess. 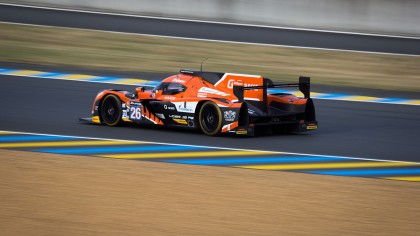 “What we don’t want this to be is a hardware competition,” said Roborace CTO Bryn Balcombe, in a GTC session. “The AI drivers that sit inside these cars are the key performance differentiators.” Teams are each provided with a demo car with a driver called DevBot. DevBot allows the teams to test and evaluate their technology and tactics. Each team will need to generate systems to control moving parts, enable autonomous decision logic as well work out how to integrate live feeds from the overseeing teams.

Robocar on display at NVIDIA booth at CES

The NVIDIA powered car is on display this week at the Consumer Electronics Show in Las Vegas showing off its latest upgrade to the Pegasus AI platform which can perform 320 trillion operations per second. This is about ten times faster than its predecessor. So if the car is ready with all this processing power, when are we actually going to see them race? Despite numerous cool demonstrations the date for the official race league is still yet to be announced.

The initial plan for the league is to open the Formula-E events, which see human-driven electric cars raced against each other. While tech geeks are eager to see a full grid of autonomous cars line up against each other. There may be some work from NVIDIA and its collaborators to convince the public that watching cars without drivers is entertaining. The Formula-E series officially began in Beijing on 13 September 2014. The season runs from Dec 2, 2017 – Jul 29, 2018.