Talks of introducing an extreme motorsport revolving around driverless electric race cars have been circulating through motorsport news over the last few years. While there is no official word on when the new autonomous racing series will launch, researchers who are already developing the standardized race car model have already begun to stir up a commotion on the track.

Earlier this month, the Roborace team pitted its prototype ‘Devbot’ car against professional drifter, Ryan Tuereck. The human vs. machine challenge demonstrates how AI machines match up to humans.

Preliminary tests reveal humans are still a fraction faster, but the dev team behind the car says it will be by the years end when the car will be able to outdrive every driver in the world.

The claim is bold, but as it has been proven many times before computers simply react far quicker and with far more precision than humans at nearly every task. The race to develop a fully autonomous vehicle system is on, and the research is on the cusp of taking over the automotive industry.

The Roborace Devbot and the Robobot

Currently, Roboracing researchers are focusing on the development of two autonomous vehicles; The research and development car DevBot, and the prototype racing base-model Robobot. The two autonomous vehicles are functionally identical apart from the single-seat cabin only featured on the DevBot model. The dual function makes it possible for teams to monitor their car in real-time to adjust how it thinks and feels on a racetrack.

Teams can also “train” their AI systems by interacting with their cars - steering, blocking, and other techniques can all be taught to the AI programs by interacting with the car through the cabin. The driver learns from the car while the car, in turn, learns from the techniques of the driver - a unique motive intended to drive the evolution of autonomous roboracing.

The core of roboracing is centered around a competition of who can build the most intelligent autonomous racing system, not necessarily the fastest car. Therefore, the event conveners are lobbying for a standardized racing model to be used by all participants in Roboracing, eliminating the chance of mechanical advantage.

Teams would be designated two cars - one in which a driver can sit in and assist the AI system, while another autonomous car which operates entirely independently. The elimination of any mechanical advantage leaves the racing entirely down to the complexity and effectiveness of the autonomous control systems.

Minimal modifications will be allowed to the aerodynamics and mechanical systems of the vehicle to redirect the focus around the core of the sport - electric autonomous racing. The races are not intended to directly push the speed boundary and efficiency of vehicles, but rather, the focus is to develop functional and much safer AI technologies.

The development of the Robocar began in 2016 with the introduction of the companies first test vehicle, the DevBot. The 1000 kg beast is capable of traveling a whopping 320 km/h. Despite being mounted on a carbon fiber chassis, the vehicle’s massive battery banks make it weigh more than 270 kg heavier than the dry weight of a Formula 1 car. But all that power is necessary to drive each of its four powerful 300 kW motors.

The brain of the car is powered by the NVIDIA DRIVE - a platform which combines deep learning, sensor fusion, and surround vision to change the driving experience. 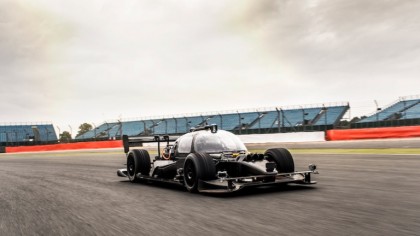 According to NVIDIA, "It is capable of understanding in real-time what's happening around the vehicle, precisely locating itself on an HD map, and planning a safe path forward. Designed around a diverse and redundant system architecture, the platform is built to support ASIL-D, the highest level of automotive functional safety."

As of yet, there is no official announcement revealing when and what teams will be entering the circuit in 2019. However, Roborace officials have revealed one of the 10 contenders will be a publically funded team participating in the race.