The Indonesian island of Bali will turn off mobile internet services for 24 hours as it observes Nyepi, which marks the start of Hindu New Year.

There will be no mobile Internet services on Bali this Saturday, as providers will be switching off services for one whole day to mark the Indonesian island’s 'Day of Silence'.

Saturday is Nyepi, or New Year, in line with the ancient Balinese calendar. This is a sacred day of reflection on the island which is majority Hindu. The international airport will also be closed.

This year the authorities have asked telecommunications companies to switch off as well and Bali firms have promised to abide by this request. Civil and religious groups put forward an appeal and the plan was announced after a meeting at the ministry in Jakarta.

The same request was denied last year. Therefore, this will be the first time internet services will be shut down in Bali for Nyepi.

WiFi connection, however, will still be available at hotels. Services such as security, aviation, hospitals and disaster agencies, which have vital importance, will still be running. The Indonesian Internet Service Provider Association is still considering whether WiFi at private residences will be off on Saturday. Phone and SMS services will still operate.

Indonesia has more than 132 million active internet users. This makes it one of the most connected nations in the world. About 29 percent of the country’s population reached the Internet from their mobile phones in 2017.

Switching off the Internet services during Nyepi is seen as a sign of respect, as Nyepi is a time when the people of Bali are expected to be quiet, reflect, and refrain from work and travel. Many Hindu people are addicted to gadgets, according to the Indonesian Hinduism Society chief Gusti Ngurah Sudiana.

“I hope during Nyepi they can be introspective,” he said.

"If the internet is disconnected, people will not die," Made Pastika, the governor of Bali, joked. "I will turn off my gadgets during Nyepi."

In the days leading up to Nyepi, Balinese perform traditional rituals which are meant to purify. There are thousands of giant effigies called 'Ogoh-ogoh' and they parade through the streets. Dramatic and magnanimous ceremonies are held. On the day itself, observers obey the four prohibitions. These are no fire, no travel, no activity and no entertainment. 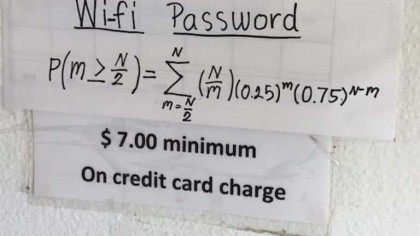 Trying to Get This Restaurant's WiFi Password Confused the Internet

The effigies symbolize demons and would usually be set on fire at the end of the parade. The Balinese believe that spirits go around the island on Nyepi. People must, therefore, stay quiet and avoid lighting fires. They should even refrain from turning on the lights, so they would not be attracting the demons.

The day after Nyepi is observed as New Year's Day. On this day, young unmarried people would perform the “Omed-omedan” or "kissing ritual" Nyepi is not voluntary or only followed by Hindu residents. Travelers and tourists on the island are expected to obey it as well. The pecalang, that is the local authorities, will be enforcing the rules of Nyepi. However, emergency service workers will be able to operate during these 24 hours.