BASIC: The First Computer Language for the Masses

Before BASIC, computers were all punch cards and Ph.D.s. After, everyone from students to hobbyists could write a computer program if they wanted to.

In the 1950s and 60s before the introduction of the BASIC programming language, computers like the Mark I and the UNIVAC would require special operators to feed in punch cards containing the computer instructions. Programs, as we know them now, did not exist, and these computers were closer to a school kid’s scientific calculator than the computers we use today.

It took several major innovations for us to move beyond the early days of computing to where we are today, but none of them would have mattered were it not for BASIC, the first programming language that anyone could learn, demystifying the computer, and laying the crucial groundwork for the personal computer revolution.

BASIC, or Beginner’s All-Purpose Symbolic Instruction Code, was an essential development that addressed a very particular need. Prior to BASIC, a mathematician or computer scientist would sit at his or her desk and write out the mathematic operations that a computer needed to perform in the form of a stack of punch cards.

SEE ALSO: LEARN TO CODE BY BUILDING YOUR OWN SMARTWATCH WITH WATCHX

They’d then go to the computer room and hand the stack over to a computer operator who would feed their cards one at a time into the machine. Depending on how many “programs” the operator had to run before they got to yours, you could be waiting all day for the output of your calculations.

No one had time for playing around on these machines, so their use was reserved for the very select few whose work was important enough to warrant it and who knew what they were doing.

When John Kemeny and Thomas Kurtz of Dartmouth College’s Math department tried to figure out how best to teach their students to use these new computing machines, they weren’t setting out to start a revolution. They simply recognized the importance that these systems would play in the future and wanted to expose all of their students to their use and function, regardless of their field of study.

“Our vision was that every student on campus should have access to a computer, and any faculty member should be able to use a computer in the classroom whenever appropriate,” he said in a 1991 video interview. “It was as simple as that.”

Together, in an incredible collaborative effort with their undergraduate students, Kemeny and Kurtz would build the world's first truly accessible computer programming language, BASIC, and it would soon become the way people around the world learned to use and program a computer for years to come.

“We were thinking only of Dartmouth,” Kurtz said. “We needed a language that could be ‘taught’ to virtually all students (and faculty) without their having to take a course.”

Getting an English major to produce punch cards with math on them would be a tough class to fill, even if it were required to graduate, so one of the key developments that made BASIC possible was the concept, brand new at the time, of Time Sharing.

This was the idea that in between sequences of user input, the computer could work on someone else’s program and circle back around to the first user once they had finished their input at a terminal. This was a breakthrough development and would soon put an end to punch cards forever.

All you needed now was the user at a teletype terminal with a keyboard where they could type in their program. Dartmouth implemented the new time-sharing model and it became known as the Dartmouth Time-Sharing System (DTSS). Now that an English major was sitting at the terminal of the DTSS, what were they expected to type?

“We wanted the syntax of the language to consist of common words, and to have those words have a more-or-less obvious meaning,” Kurtz said. “It is a slight stretch, but isn’t it simpler to use HELLO and GOODBYE in place of LOGON and LOGOFF?”

With a $300,000 grant from the National Science Foundation and two new computers from GE, BASIC was introduced in 1964, consisting of only 14 commands that allowed the user to perform mathematical operations and store the result in a variable, repeat an instruction in a loop, jump to another part of the program, and print to a teletype machine, among others.

What it didn’t have, until it was added in the 3rd revision of BASIC in 1966, was a way for a program to take input from the user, so INPUT was added, allowing a program to accept alphanumeric characters typed in by the user.

Where once computer programs were ways to perform complex calculations quickly, now they could do virtually anything and still be simple enough for anyone to learn in less than a day.

Most important of all, Kemeny and Kurtz felt, was that the DTSS system was freely accessible to anyone who wanted to use it. In a brochure announcing the opening of the Dartmouth’s computer center in 1966, Kemeny wrote that “[a]ny student can enter the Library, browse among the books or take some back to his room. No one asks him why he wants the book, and he does not need anyone’s permission.”

“Similarly, any student may walk into the Kiewit Computation Center, sit down at a console, and use the time-sharing system. No one will ask if he is solving a serious research problem, doing his homework the easy way, playing a game of football, or writing a letter to his girlfriend.”

Computers were now available for anyone with a desire to use one and it was a revolutionary step in computer history.

Evangelizing BASIC to the World

The success of BASIC at Dartmouth was self-evident almost immediately. Kemeny and Kurtz celebrated their success in a 1967 report by pointing out that 2000 students, accounting for 80% of the incoming freshman undergraduates since BASIC’s introduction three years earlier, had learned how to write and debug computer programs using BASIC and DTSS.

“Anyone who tries to convince a Dartmouth undergraduate either that computers are to be feared or that they are of little use, will be met with well-founded scorn,” they wrote. “The Dartmouth student knows better–and knows it from personal experience.”

Nor did they stop with Dartmouth College. Using telephone lines, Dartmouth allowed other schools in the region to use DTSS for their own purposes, including high schools all the way up to Harvard and Princeton. It shared their knowledge with other institutions and helped set up similar systems at other schools using BASIC and GE took DTSS and BASIC and sold the system to business clients.

BASIC was well on its way to spreading the ability to program a BASIC compatible computer—which were likewise being produced in greater numbers—to any student, business office, or hobbyist who wanted to do so.

It took the introduction of a new implementation of BASIC though, Microsoft BASIC, for the language to leave the offices and universities and go mainstream.

In 1975, MITS launched the Altair 8800, the world’s first ever personal computer. Honeywell engineer Paul Allen and his friend Bill Gates—then still at Harvard—wrote a version of BASIC that would run on the new machine, becoming Microsoft’s first-ever software product. 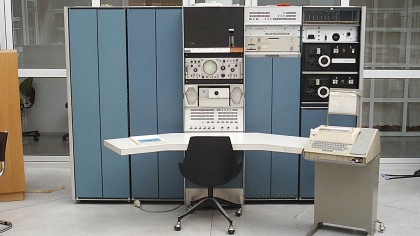 "I estimated once that, even before Bill Gates got into the action at all, five million people in the world knew how to write programs in BASIC," Kurtz said in Birth of BASIC, Dartmouth College's film celebrating the 50th-anniversary of the development of the computer language.

Microsoft would go on to license their version of BASIC to every major computer manufacturer of the era, from Apple to Atari, ensuring that almost all of the first wave of programmers born out of the personal computer revolution would likely have written their first programs in BASIC.

“The goal of Kemeny and Kurtz was to make these great, new and interesting machines available to a much broader group of minds,” says Daniel Rockmore, the Director of the Neukom Institute for Computational Science at Dartmouth College.

“They succeeded. Looking around at people staring at their cell phones, you could argue that they succeeded too well.”