A computer model that captures the complexity of a bats flapping wing might be the key to a new era of plane design.

Bats have inspired the design of flying vehicles for more than a century. Now, new computer modeling of bats wings and their flight patterns will help inspire the next generation of wing design.

SEE ALSO: BIOMIMICRY: 9 WAYS ENGINEERS HAVE BEEN 'INSPIRED' BY NATURE

Researchers from the University of British Columbia and the National University of Singapore have developed a comprehensive 3D computer model of bat wing-flapping flight that might help drone and airplane designers create more nimble vehicles.

The model gives never-before-seen insight into the flight flapping mechanisms of batwings. This information might be the key to a new era of aviation design. The high-fidelity model is scalable and has the potential to be used by designers and engineers alike.

“Bats can navigate tight spaces and negotiate gusts of wind with apparent ease,” says Rajeev Jaiman, the senior author of the study and a professor of mechanical engineering at UBC.

“By understanding how they do what they do, we may be able to design flying devices that operate more effectively than before, including in emergency and military situations.”

Flapping wings designs have proven difficult for humans to master, however they hold many advantages of fixed-wing flight. Flapping wings are quieter and provide greater maneuverability but have proven to be difficult to translate to human-scaled machines.

Bats, in particular, have incredible adaptability and efficiency thanks to the membrane-based wings that are far more dynamic than other wings such as those found on insects or birds. 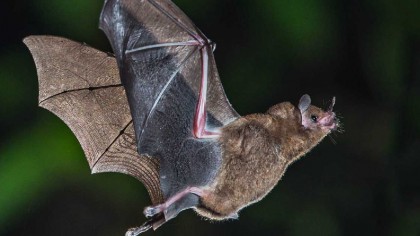 Can Bats Live Forever? A New Study Reveals the Secret behind Bats’ Longevity

The sophisticated model show in detail the way bat wings twist and turn as they fly, responding to airflow and creating lift, thrust and other forces associated with flight.

Previous models of bat wings had been oversimplified or incomplete to act as a true resource for engineers and designers. "Bat wings are elastic structures composed of many different parts, and they interact with air in highly variable and aerodynamically complex ways,” says Jaiman.

Next step: AI and application

“Our framework reflects key flight dynamics and could serve as a tool for the design and optimization of flexible flapping wings in aerial vehicles.”

While insect and bird flight patterns have been studied in the past, they offer a less robust platform for scaling up to human engineered flight. Insects wings tend to be limited by their scale while the hollowness of birds bones presents challenges to current aeronautical aviation.

The researcher's study was published in Computers & Fluids,

The Future of Flight: Hydrogen vs Electric Planes