This Bathroom Knows Which Stalls Have Someone in Them

It's a problem most people have faced regardless of gender or nationality. You have to go to the bathroom and yet you're not entirely sure which stalls are free. You can check for feet under the door, or you can knock on stalls. If the stall door reaches the floor, you might have to try turning the handle. And it seems like the problem only gets more aggravating the more you have to use the bathroom. 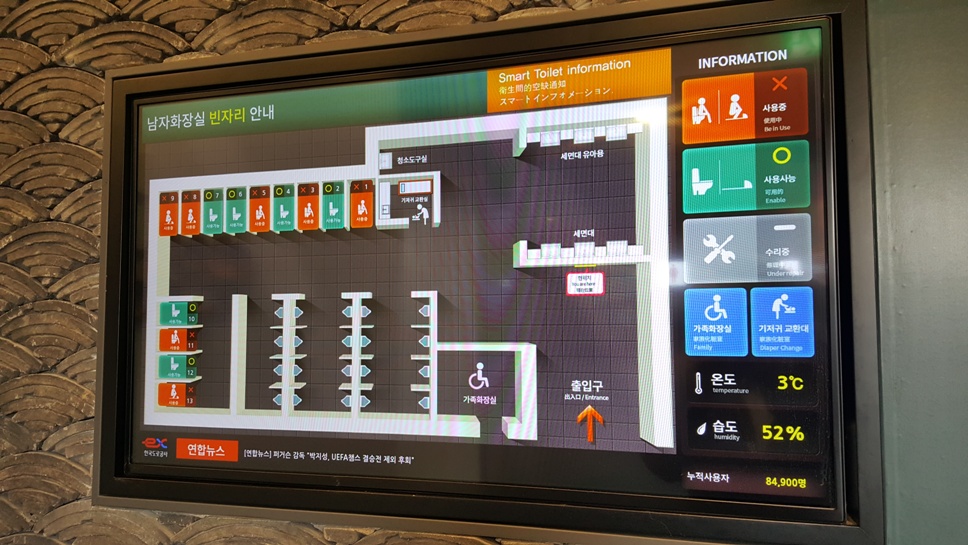 It uses a display to inform those entering the bathrooms which stalls are available and which are in use. The screen also lets people know which stalls have a regular toilet or a squatting toilet. (And for those unfamiliar with squatting toilets, they are exactly what they sound like.)

We're not entirely sure how the system tracks occupancy, but we doubt it's based on a human inputting data. More than likely, the system gets a notification with each door lock or closure.

South Korean bathrooms aren't the only ones seeing a tech upgrade, either. Bathrooms in China are adding facial recognition to their restrooms. No, it's not to check to see if the public regularly goes to the toilet. It's to stop visitors from taking entire rolls of toilet paper home with them. The dispensers scan a visitor's face as they enter the bathroom. Once someone stands in front of a computer for a few seconds, the dispenser gives out two feet of toilet paper. However, there's a catch. A visitor won't get more paper from the machine until nine minutes after the first use. The trial is currently underway at Temple of Heaven Park in Beijing.

"The people who steal toilet paper are greedy," said He Zhiqiang, 19, a customer service worker to the New York Times. "Toilet paper is a public resource. We need to prevent waste."

Restrooms in other countries are simply lucky to have locking doors. For many in the United States, sophisticated air dryers and automatic flushing are as fancy as restrooms get.