With the help of robotic spies natural ecosystems may be rewired to serve human interests.

The ASSISIbf (Fundamentals of Collective Adaptive Systems) research team has supposedly coordinated the choices of bees in Austria and fish in Switzerland through the use of undercover robots that manipulate the group behavior of the two animal groups.

Simply put, one species is presented with a binary choice of either going in one or the other direction via a robotic spy that acts as an undercover agent, which entices the fish school to chose route A. In turn, this sends a signal to the bee robot, which effectively amounts in the reciprocation of the behavior. 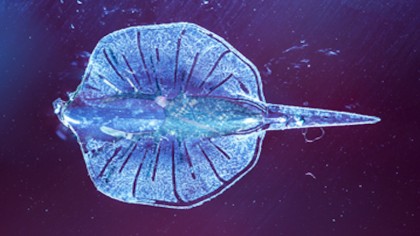 The ASSISIbf had developed an evolutionary algorithm to carry out the task. As the platform, states: “These robots will adapt by evolutionary algorithms until they have learned to interact with animals in a desired way. This new technology is aimed to lay new foundations on the way in which humans can interfere with animal societies in order to manage the environment.”

What is the relevance of cross-species communication?

Upon first glance, the idea of cross-species communication sounds a bit silly, no? Why, after all, do we need bees to coordinate their activities with fish? The initiative, led by team coordinator Dr. Thomas Schmickl, has the following arguments:

1. Develop robots that can influence the collective behaviors of animals (bees and fish).

2. Establishing an adaptive and self-organizing society build by robots and animals.

3. Enable the robots to autonomously „learn“ the social language of the animals. Establish mixed societies that pursue a common goal which can be defined by human users‘ of the system.

4. Allow the robots to gain novel skills by incorporating the capabilities of the animals (sensors, cognition).

The key thing to think about here is coordination. In the past, technology has only been used as a tool for human-to-object relations. The human-technological-ecology has therefore been separated from the natural ecology. This technological breakthrough would allow for autonomous interactions between robots and machines which would be controlled by human system preferences.

In effect, making the selective rewiring of ecosystems an outcome. In a recently published study of the initiatives early outcomes, the team has conceptualized these advancements under the term “biohybridity” explaining their concept as follows:

“The robots enable this biohybrid system to function at any distance and operates in water and air with multiple sensorimotor properties across species barriers and ecosystems. These results demonstrate the feasibility of generating and controlling behavioral patterns in biohybrid groups of multiple species.

Such interspecies connections between diverse robotic systems and animal species may open the door for new forms of artificial collective intelligence, where the unrivaled perceptual capabilities of the animals and their brains can be used to enhance autonomous decision-making, which could find applications in selective “rewiring” of ecosystems.”

With this human lead rewiring of complex ecosystems new advancements in agriculture, ecological restoration, and geographic monitoring of plant and animal groups can be introduced.

How will these new bio-hybrid coordination systems affect humans? Perhaps, with the guidance of robots, animal-robot hybrids will replace us as the new 'toiling masses' of the 21st century?

A Plausible Explanation of Sex Change in Fishes

Have You Ever Wondered What Earth Is Made Of?