Researchers from Berkeley Lab recently made a transistor with a working 1-nanometer gate- the smallest transistor on record.

Ali Javey at the Department of Energy’s Lawrence Berkeley National Laboratory (Berkeley Lab) recently led a team who engineered a transistor just one 50,000th the width of a hair.

“The gate length is considered a defining dimension of the transistor. We demonstrated a 1-nanometer-gate transistor, showing that with the choice of proper materials, there is a lot more room to shrink our electronics.”

The technology that allowed the transistor to be reduced to be just 1/20th the width of the top-end transistors on the market came from engine lubricant. The lubricant, or molybdenum disulfide (MoS2), was combined with carbon nanotubes to create the revolutionary transistor.

Previously, it was believed that transistors could not exceed the theoretical minimum width of 5-nanometers due to an effect known as quantum tunneling. As high school chemistry and physics would teach, electrons do not follow a particular path. Rather, they travel through an area of where they might be at any one time, hence the term "cloud of electrons."

The area of the cloud denotes the area where the electron is most likely to be. However, there is a small chance that the electron could jump out of the cloud and be at random somewhere else by tunneling from one point to another without actually traveling through the distance between.

In theory, having a silicon transistor of less than 5 nm would cause unwanted current leaks since the collector would be so close to the emitter that electrons would constantly make the quantum leap across, even without having an induced electric current. Effectively, a false signal would be transmitted and the binary code would be defective.

Impressively, and somewhat miraculously, scientists managed to overcome the threshold by using a different material entirely. Silicon molecules do not have as strong of a hold on their outer electrons when compared to carbon. Therefore, it is much less likely for a valent electron to make the quantum leap since there is a greater hold on the electron itself. 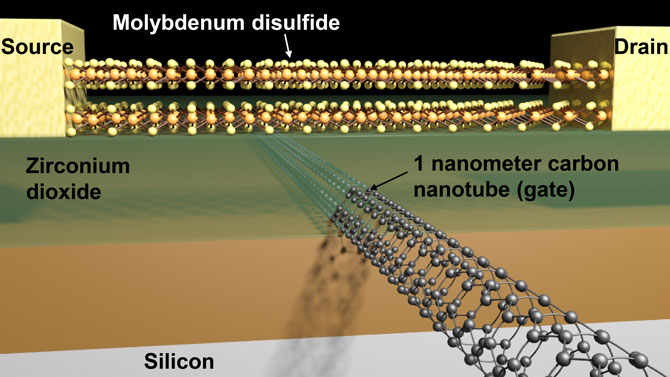 To make the transistor, however, the material must be a transition metal. That means it can be resistor and a conductor based on the presence or lack of an electric current. Carbon falls under this category. Until recently, it was very hard to create a carbon structure with few enough imperfections to become a reliable transistor.

"The semiconductor industry has long assumed that any gate below 5 nanometers wouldn’t work, so anything below that was not even considered,”

“This research shows that sub-5-nanometer gates should not be discounted. Industry has been squeezing every last bit of capability out of silicon. By changing the material from silicon to MoS2, we can make a transistor with a gate that is just 1 nanometer in length, and operate it like a switch.”

The new transistor worked seamlessly, providing a promising alternative to the traditional, and well-exhausted silicon transistors.

“This work demonstrated the shortest transistor ever,”

Says Javey, who is also a UC Berkeley professor of electrical engineering and computer sciences.

“However, it’s a proof of concept. We have not yet packed these transistors onto a chip, and we haven’t done this billions of times over. We also have not developed self-aligned fabrication schemes for reducing parasitic resistances in the device. But this work is important to show that we are no longer limited to a 5-nanometer gate for our transistors. Moore’s Law can continue a while longer by proper engineering of the semiconductor material and device architecture.”