3D printing has become enormously popular in recent years, even hitting mainstream markets. These seven 3D printers represent varying price ranges and capabilities, and this list includes something for every skillset.

3D printers have come a long way in recent years. They have transformed from a novelty item to become more acceptable by the mainstream market. There are currently around 150 models out there, but which ones are the best 3D printers?

If you are not too familiar with this tech, you can check this out for an overview.

Lifewire rate this as not only one of the best 3D printers, but also THE BEST of 2017. The M2 is the handiwork of an Ohio based company, Makergear. It is targeted at professional-level consumers and is generally praised for its high quality and reliable engineering.

This machine comes pre-assembled but does come with a suite of upgrades and tweaks to personalize to your specific needs. There is an option, for example, to install onboard controls, a dual extruder, and interchangeable nozzles.

Two downfalls to this machine: users have said it's not the easiest machine to learn to use, and it's also not the quietest. For experienced users, it probably the best thing you'll ever own; for beginners, it might not be the best choice.

That leads us nicely to the next one on our list of best 3D printers. The Lulzbot Mini is a great choice for 3D printer beginners. It is the epitome of simplicity and reliability, according to Lifewire,

It's basically a plug and play device with auto-leveling bed, all-metal hot end and self-cleaning nozzle. All of these features make it a dream to use. There is also a strong community of users if you need some help or guidance.

Though lacking in precision when compared to others here it does have a minimum layer height of 50 microns. That's pretty good really. It is also a lot smaller than others on the list with a build area of 152 by 152 by 158 mm.

This bad boy is aimed at the more serious 3D printer folks out there. This is a professional resin printer for intermediate or pro users. It has a nifty peel feature and heated tank that increase print consistency, plus it sounds cool.

It comes with a touchscreen display and wireless controls for ease of use. The resin system is automated as well to keep the mess to a bare minimum.

Build volumes are a little better than others at 145 by 145 by 175 mm and it minimum layer height is 25 microns. It uses SLA rather than FDM printing, so is a little slower and bit more expensive.

Made by Ultimaker, a Netherlands based company, the Ultimaker 2 is great for those on a budget. It has a lovely design and well lit open front. This is also a very capable machine and a worthy entry on our list of best 3D printers.

It has a minimum layer height of 20 microns and is relatively cheap compared to others here. It uses the FDM printing process and can be used straight out of the box. Its build volume is 230 by 225 by 205 mm. It can also print up to 300 m/s.

It does suffer from a lack of a dual extender, but that's not a deal breaker. You can even carry it around.

MakerBot a quite a prolific 3D printer provider. Their fourth gen Replicator 2 is one of their more commercially successful models. It has a more industrial look than others on our list of best 3D printers and looks awesome for it.

It's a great choice for larger projects with a build volume of 285 by 153 by 155 mm. Which is nice but only has a minimum layer height of 100 microns.

This is another FDM printer and it supports printing from an SD card. It predominately prints on PLA. Given its build, this one is a very sturdy and reliable machine with great build quality.

It does lack a heated platform and is pretty noisy, apparently. This machine is best suited for intermediate users and is not the cheapest.

Here's a nice cheap and cheerful model for anyone who wants to have a crack at 3D printing without the excessive financial initial cost. The FlashForge Creator Pro is often described as the "absolute best value for money" when it comes to 3D printers.

It comes with a handy plug and play setup and has a build area of 225 by 145 by 150 mm. This model can be used with ABS, PLA and other materials to give you minimum layer height of 100 microns.

It comes equipped with dual extenders and a lot of spare parts for maintenance. This one is pretty noisy and is fairly bulky, weighing in at 11.5 kgs.

Not the catchiest of names, but this one is ranked by Lifewire as the runner up best for beginners 3D printer. This one is a great choice for beginners to cut their teeth on. There is also a mini version. 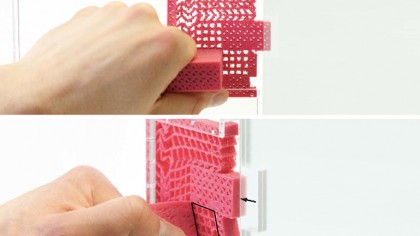 This 3D Printed Door Handle Works With No Moving Parts

The entire thing is assembled with as little as six screws, which is nice. It comes with a 2GB microSD card with lots of templates to print away using the sample PLA filament that is also included. The Monoprice can also print with any type of 3D printer filament.

It has a building space of 203 by 203 by 177 mm, which is lovely. This model also comes with a heated build-plate allowing for creating more complex models when compared to other beginner printers.

This one has a lot of easily sourced replacement parts, if you can't print them, and has a lot of upgrades for more professional or complex print jobs.

So there you go.  Some of the best 3D printers on the market. Any tempt you? Have you got any suggestions? Let us know in the comments.