Could ARPA-E really do for energy technology what DARPA did for the Internet? Bill Gates seems to think so; that's why he's investing millions of dollars into the organization.

Any engineering fan is familiar with DARPA, the US Defense Advanced Research Projects Agency. But engineers and innovators looking to the future of clean energy keep tabs on another organization: ARPA-E. The Advanced Research Projects Energy division specializes in promoting and funding ideas that could power the world. DARPA's 'little brother' is getting more popularity thanks to a recent blog post from tech giant Bill Gates.

"ARPA-E might be my favorite obscure government agency," the Microsoft founder wrote in the post. "In fact, it’s one of the reasons I felt confident about being part of a $1 billion investment fund last year."

Gates's $1 billion venture is called the Breakthrough Energy Ventures, and he's not alone. Twenty of the world's richest business people are investing in the fund for the next 20 years. Other investors include Facebook founder and CEO Mark Zuckerberg. Amazon CEO Jeff Bezos, and Virgin Atlantic's Richard Branson. The fund looks to invest in technologies that will "reduce greenhouse gas emissions by at least half a gigaton," according to its website. However, these investors aren't just throwing their money around to theoretical concepts. All projects gaining investments have to have "existing scientific proof of concept."

And now, one of the biggest partners for the BEV's investment strategy will be ARPA-E. ARPA-E launched in 2008 with the intention of promoting energy-efficient technology the way DARPA revolutionized the Internet. Since its creation, ARPA-E projects led to the birth of 56 new companies.

"The idea is to invest the private capital that helps entrepreneurs take promising zero-emissions energy technologies out of the lab and into the market."

So far, the fund has awarded a significant amount of money including $30 million for 21 projects dedicated to more effective semiconductors and power converters. The CIRCUITS projects included four based at universities throughout the state of Illinois.

"Hardware built with (wide bandgap) devices has the potential to be smaller, lighter, and much more energy-efficient, with applications across valuable sectors including transportation, information technology, the grid, and consumer electronics," ARPA-E acting director Eric Rohlfing said in a statement. "Developments from CIRCUITS projects could one day lead to super-fast, compact electric vehicle chargers, more efficient ship propulsion systems, and lighter, aerodynamic aircraft that can carry more passengers with less fuel."

Gates noted that while the U.S. Department of Energy funds significant research, investing in the private sector is one of the easiest ways to shift public support for energy-saving technologies.

"The crucial connection between private companies and public research is something I know well from my own experience with Microsoft," Gates said. 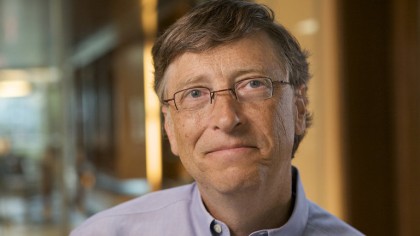 One of the tech entrepreneur's favorite ARPA-E programs is REFUEL. The program consists of multiple partnerships developing alternative fuels, including ways to convert carbon dioxide directly to ethanol or using ammonia to create hydrogen.

"If ARPA-E does for energy what DARPA did for computing and the NIH does for health, it will be one of the smartest public investments I can imagine."

Bill Gates warns COVID-19 risks reduced, but another pandemic is at hand

Bill Gates' new book says COVID-19 could be "the last pandemic". Is he right?