Bill Gates dropped out of university to found one of the world's most successful businesses of all time.

Bill Gates is the former co-founder and head-honcho of the software behemoth Microsoft. 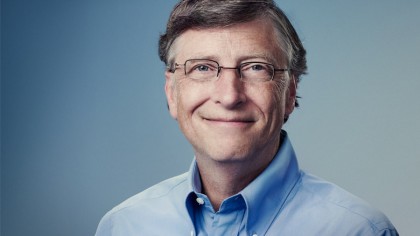 He also happens to be the second richest man in the world with an estimated wealth of $90 Billion (as of June 2018) according to Forbes.

Although he never graduated from Havard his lack of higher qualifications in no way held him back from starting and building one of the most successful companies of all time.

Today, the 28th October 2018, is Bill's birthday so we thought it might be a nice idea to explore the life and times of one of the most famous and successful "geeks" of all time.

William Henry Gates the 2nd, Bill Gates for short, was born on the 28th October 1955 in Seattle. Bill's father, William Henry Gates Senior was a prominent attorney and his mother, Mary Maxwell Gates, served on the board of Directors for the United Way International and worked as a schoolteacher.

He was the middle child of two sisters, Kristi and Libby. He is the fourth of his name in his family but is known as William Gates III or "Trey" because his father had the "II" suffix.

His parents encouraged him to enter law at an early age and also encouraged the benefits of competition within him. His family also regularly attended Conga church of the Congregational Christian Churches which was a Protestant Reformed denomination.

In his early teenagehood, Bill attended public elementary school and the private Lakeside School in 1967. It was here that Gates discovered his love for software and began to program computers with his friend Paul Allen (who sadly recently passed away) in 1968 at the tender age of 13.

In 1973, when Bill has 18, he enrolled at Harvard University and his residence was just down the hall from Steve Ballmer (former CEO of Microsoft).

Whilst at Harvard Bill Gates developed a version of the BASIC programming language for the first microcomputer the MIT Altair 8800.

Bill drops out of Harvard and Microsoft is born

Seeing the potential for the microcomputer Bill left Havard in his Junior year. He decided to devote his energies to developing a new company, Micro-Soft (the name was changed in 1976), which he had started with his childhood friend Paul Allen in 1975.

The pair were "Guided by a belief that the computer would be a valuable tool on every office desktop and in every home, they began developing software for personal computers. Gates' foresight and his vision for personal computing have been central to the success of Microsoft and the software industry." - Microsoft.

This was immortalized in their founding vision of "a computer on every desktop and in every home". A vision that was probably laughed at the time.

In 1979 Microsoft moved its office from Albuquerque to Washington State. In 1980 Bill and Microsoft negotiated an agreement with International Business Machines Corporation (IBM).

This was to be a world-changing event as the start-up software company suddenly had a license to its fledgling OS for the next generation of personal computers.

This event would change the computer business on its head and ultimately shifted power from hardware manufacturers to software programmers. And the rest, as they say, is history.

Microsoft takes over the world

In 1985 Microsoft 1.0 OS was launched - this would mark the start of global dominance for the software company.

Today, hundreds of companies manufacture hundreds of thousands of brand-name personal computers each year, but more than 90 percent of those machines use Microsoft’s Windows operating system.

In 1994 Bill Gates married Melinda French Gates. The couple would go on to have three children and later founded a philanthropic organization together.

The seminal Windows '95 was launched in, well 1995 and in 2000 Steve Ballmer joined the company as CEO as Bill assumed the role of Chief Software Architect.

Bill finally left his day job at Microsoft in 2008 to take up the role as Chairman of the Board until he finally stepped down in 2014.

Whilst Bill Gates was at the helm Microsoft had one grand vision for the future of the company, and as it turned out, the world at large. Bill and Paul were absolutely committed to continually advance and improve software technology to:-

- Make it easier to use;

- To improve user experience and;

- By virtue of the above, allow for the general public to enjoy using computers.

"Our mission is to empower every person and every organization on the planet to achieve more." - Microsoft Mission Statement

In fact, Microsoft are still committed to a long-term view, reflected in its industry-leading investment in research and development each year for the betterment of all.

Did Bill Gates ever graduate?

Although Bill did drop out of Harvard in 1975 his lack of a college education certainly did not hold him back. But this would remain unfinished business for Bill Gates for the rest of his life.

That was until 2007. In June of that year, Bill returned to Havard to pick up an honorary Law degree from his former Alma Mater.

"We recognize the most illustrious member of the Harvard College class of 1977 never to have graduated from Harvard,” said Harvard University Provost Steven Hyman. “It seems high time that his alma mater hand over the diploma.”

This would, finally, put to bed decades of professional irritation for Bill.

“I’ve been waiting for more than 30 years to say this, Dad, I always told you I’d come back and get my degree,” Gates, 51, told the crowd, which included his father, also named Bill.

This event occurred a year before Bill finally stepped away from the day to day running of Microsoft to focus on his philanthropic work. Bill would remain as Chairman of Board at Microsoft until February the 4th, 2014.

Apart from setting up and heading one of the biggest and most successful companies of all time, Gates has found time to work on some other things.

For example, he has penned a few popular books. In 1995 "The Road Ahead" focuses on providing a bird's eye view of the changing landscape that information technology was creating on the world.

It was at the top of the "New York Times" bestseller list for seven weeks.

In 1999 he published "Business @ the Speed of Thought" that focusses on the enormous benefits to business that computer technology had and would become over time.

This was published in over 25 languages and was made available in over 60 countries.

Bill pledged all donations from these two books to be given to non-profit organizations that support the use of technology in education and skills development.

Bill Gates also founded another company, Corbis. This company is currently developing a vast digital archive of art and photography from public and private collections around the world.

Owing to the great friendship between Bill Gates and the "Oracle of Idaho" Warren Buffet it should come as no surprise that he also sits on the Board of Directors for Berkshire Hathaway Incorporated.

In 2006 Bill helped launch TerraPower with the aim to provide affordable, secure and sustainable forms of nuclear energy to the world.

Since 2010 Bill has also been hosting his very own blog called Gates Notes. Here he shares his general thoughts on anything to his the work of his philanthropic organization the Gates Foundation.

He has also given many poignant and fascination talks around the world including TED talks.

If you are interested you can check out the blog for yourself. On this blog he recently wrote a touching piece about his late close friend and Microsoft Co-Founder Peter Allen - make sure you have a hanky at the ready.

"Giving back" is a closely held value for Bill Gates. He is famed the world over for the continuous and very generous donation of his wealth and, probably more valuable, his time to those in need.

Bill and his wife Melinda founded the now famous Gates Foundation in the year 2000. This foundation's aim is to help reduce inequities in the United States and around the world.

Most of the organization's work involves the support of philanthropic initiatives to improve global health and learning. It hopes that at some point in the 21st Century advances in these areas will be freely available to all humans the world over.

One of the first of which was their Gates Millennium Scholars incentive that pledged $1 billion towards helping 20,000 young people to afford their studies at the college until 2020.

In 2002 the Gates Foundation also installed 47,000 computers in 11,000 libraries in all 50 states of America. In 2006, Bill's close friend Warren Buffet also pledged to donate the majority of his wealth to the organization.

In 2010 it donated $10 Billion, to be provided over a decade, to help research, develop and deliver vaccines to the poorest areas of the globe.

Also in 2010 Bill and Melinda Gates and Warren Buffet founded the Giving Pledge that encourages the world's wealthiest people to dedicate the majority of their money to philanthropy.

Most recently, in 2013, the foundation launched a $5.5 billion initiative to eradicate polio by 2018.

COVID-19 Testing at Home or at a Drive-Thru