Here are 8 mega-projects that will transform some of the world's major cities.

Fancy seeing some mega-project redevelopments around the world? Great you are certainly in for a treat. The following 8 are a collection of currently ongoing "re-imaginations" of iconic landmarks and spaces within some of the world's major cities. 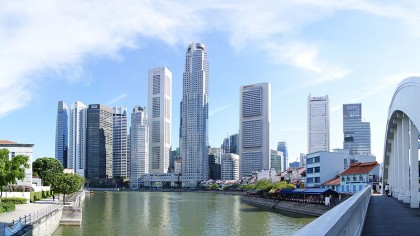 Top 9 Most High-Tech Cities in the World

They range from relics of the industrial age to images of the distant future. The following list is far from exhaustive and is in no particular order. We have attempted to provide project costs, but as anyone who knows anything about construction projects will tell, you really should take them with a pinch of salt.

This ambitious example of mega project redevelopments will see one of London's most iconic landmarks completely re-imagined as a residential and commercial complex. The project is supposed to span over seven phases and run between 2014 and 2025.

The final site will span over 244 thousand square meters and is the largest project London has seen for 30 years. The site's first major tenant will be Apple who plans on moving their UK Headquarters there by 2021.

They will occupy around 40% of the building's proposed office space.

Ever since the tragic event on September 11th, 2001, New York City has been attempting to heal its physical scars by redeveloping the former site of the World Trade Center. The 16-acre site in Manhattan has seen intense development with most of the proposed construction completed in July 2017.

2020 should see the completion of three more towers, a small church and a performing arts center.

Todtown is a new mixed-use development in Shanghai's Minhang District. It is projected to be completed by 2020. The re-development will supply around 1,000 apartments and an enormous 39.6 thousand square meter mall.

Paris began to redevelop a 262,000 square meter section of its real estate in 2016. The final site will be a mixed-use development called Europa City, just north of downtown. Europa City is truly an ambitious example of mega-project redevelopments.

Danish Architect firm, Bjarke Ingels Group, was commissioned to provide the winning designs. You may have heard of these guys before, they are responsible for Google's Californian Headquarters. The site will provide new housing, shops, and restaurants with exact composition and numbers not yet confirmed.

Europa City also has plans to include plazas, a ski slope, walkways, a golf course and a new transit system.

Istanbul is set to see a huge redevelopment in the heart of the city. In April 2016, the Metropolitan Municipality Council approved plans to construct 50,000 residences within seven towers on the few remaining slots in the city center. The proposed site was once used as a military complex.

The final site will incorporate a shopping center, underground parking, park, theater, ice rink and even its own airport!

Planning to provide housing or around 5 million people, The New Cairo Capital will cover an area of roughly 82 million m2. It is being financed largely by Chinese developers.

One of the investors, China Fortune Land Development Company, had already pledged $20 billion of the complete project. The final site will include 1,250 mosques and churches, a 5000 seater conference center, schools and colleges and medical facilities. It will also include what is projected to be the world's biggest park.

Mostafa Madbouly, Egypt's Housing Minister, told BBC that the project will consume around £45 billion and set to be completed by 2022. Work began in 2015.

Set to span over around 100 acres, Berlin has plans to build a completely new neighborhood for its growing population. The development, like many others, will be a mixed-use development near the Berlin Central Station. It is set to become a new commercial and residential hub for the city.

It is planned to be completed by 2025 and will include around 2,000 apartments, 1.3 million m2 of office and retail space, promenade, school and associated support infrastructure.

The ground was broken in 2014 but the exact cost has not yet been announced. The development is not without its critics, however.

Last but not least on our list of mega-project redevelopments takes us to LA. Construction was planned to begin in 1994, but opposition from environmental groups led to a series of legal issues. These issues appear to have been settled and the development is set to be completed by 2035.

It will be another mixed-use site with 21,500 single family homes, condos, and apartments. Interestingly, 10% of the real estate, will be priced at below-market rates. Plans are for the "ranch" to start out as two villages with 5,500 homes with 0.76 million m2 of retail space between them. 10,000 acres have also been ring-fenced to provide public outdoor spaces.

The entire project forms an integral part of Mayer Eric Garcetti's ambition to provide 100,000 new units by 2021. LA has a chronic housing shortage of around 500,000 homes to date, according to the California Housing Partnership Corporation.

So there you go some billion dollar mega-project redevelopments as requested. Do you approve of any? Which ones have we missed? Comment below, as always.

Working from Home And the Future of Smart Cities

The World's Top Green Hydrogen Projects That Could Change the World