Billions of Cockroaches Bred by AI for Potions Could Cause Catastrophe

A chinese pharmaceutical company is using AI to run a giant cockroach-breeding farm to harvest the insects for medicinal use. Experts fear the pests escaping could cause chaos for a nearby city.

A catastrophe waiting to happen?

If that image is not scary enough, Professor Zhu Chaodong, head of insect evolution studies at the Institute of Zoology in Beijing warned that, should the insects ever escape, due to human error or natural disaster, it would cause a “catastrophe” for the nearby city of Xichang. "Multiple lines of defense must be in place and work properly to prevent the disaster of accidental release," he said.

Chaodong added that even a dozen of escaped cockroaches could infest an entire neighborhood because of their quick rate of reproduction. The insects are being held at a giant farm, roughly the size of two football fields, run by AI.

The farm, where few humans are ever allowed, is sealed-off and provides an environment ideally suited for the reproduction of the pests; warm, humid and dark. It is also equipped with an intelligent system that collects and analyses more than 80 categories of data such as food supply, consumption, temperature and genetic mutations. 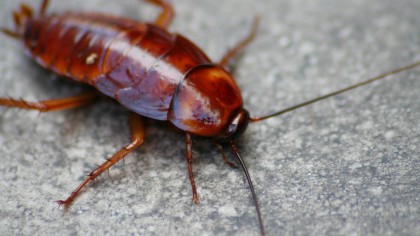 The farm has a "smart manufacturing" system that also "learns" from its data and adjusts accordingly to promote the growth of the cockroaches. The cockroaches are in high demand as ingredients in a “healing potion,” consumed by over 40 million in China, for the treatment of gastric pain, respiratory issues, and other conditions.

The SCMP reported that customers of Gooddoctor Pharmaceutical Group may not be aware that their magic potion is made of insects as the ingredient is listed only as Periplaneta Americana. “This is knowledge I’d rather live without,” said a patient who had found out.

Perhaps the most disturbing part of the article was the fears expressed by some that the farm’s use of genetic screening could see the development of “super-cockroaches,” insects with super reproduction abilities and size. However, Chaodong said this was not a substantiated concern because every cockroach is already “a super-cockroach.”

“Mother Nature has already done its job. There is little room left for us to make improvements,” Chaodong added. He explained that the pests have already survived conditions that have seen the extinction of many species.

The article ended on a positive note revealing the potion’s medicinal effects seem to be valid. “I don’t know the effect, but I healed eventually,” said a patient who took the potion for a back injury.

A representative of Gooddoctor Pharmaceutical Group in Beijing Han Yijun also added that the “drug has been used in hospitals for many, many years and established an enormous number of fans.”

“It is a disgusting insect, but there are hardly any drugs on the shelves with the same effect,” Han said.

The metaverse could generate $3 trillion for the economy by 2031