Researchers have conceived of an ingenious way to turn tree glue into biodegradable plastic, and reduce pollution caused by plastic packaging.

Plastic packaging has become a serious environmental threat, and there are serious initiatives taken by several countries across the globe to ban plastic bags, and food producers are seeking alternative solutions. According to Eurostat, in 2015 alone, 166.3 kg of packaging waste was generated per inhabitant in Europe, varying from 51.2 kg per citizen in Croatia to 222.2 kg in Germany. 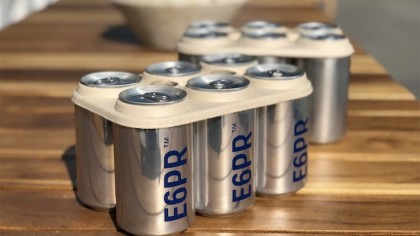 Although some of this waste is recycled, much of it stays in landfills taking decades to biodegrade and harming the environment. In fact, the European Association of Plastics Recycling found that in 2016 only 40.9% of packaging was recycled.

But what if you did not even have to recycle your plastic packaging? What if it was as biodegradable as the food it protects?

As biodegradable as food

This is the dream that researchers at the University of Warwick are trying to achieve and they could be just five years away from doing so. The team, led by professor of Biological Chemistry Tim Bugg, have stumbled on a natural tree glue called lignin. This glue is flexible enough to be molded into containers, strong enough to be sturdy and, best of all, completely biodegradable.

Lignin gets its unique qualities from its consistency evolved to hold cellulose fibers together in order to stiffen plant stems. The tree glue is an unwanted byproduct of the papermaking industry, carefully removed during processing because its properties weaken and discolor paper made of wood pulp.

Now Bugg and his team have developed a method for genetically modifying a lignin-feeding bacteria called Rhodococcus jostii into a specimen that can turn the glue into large amounts of biodegradable plastic. The modified bacteria may prove to be a key in a process once considered almost impossible.

“I have been working on lignin for 40 years and when I started people said ‘you’re wasting your time’ but now people are thinking this is possible. Still difficult but it is possible,” said Bugg speaking at a briefing in Central London, according to The Telegraph.

Bugg’s re-engineering efforts also saw his team combine the genetic material from two strains of bacteria to increase the speed at which the tree glue was transformed into plastic. “Normally the bacteria uses it for growth, and breaks it down into small molecules which it uses as food to grow,” Bugg explained.

“So we are trying to intercept that process so it still can grow but it can do something for us at the same time. Because lignin is complex, as you break it down you get a complex mixture but what’s nice is with these bacteria they are able to funnel all this,” Bugg further extrapolated.

For now, the team hopes to be successful in their unique endeavor within the next five years. If recent developments in bacterial engineering are used as a reference, the team may well achieve its ambitious timeframe.

This week alone saw bacteria engineered into exhibiting stochastic Turing patterns and into producing highly efficient solar cells. Why should tree glue processing be far behind?

How to Make Your Own Tree-Themed Desk Waterfall Feature