Researchers from the University of Zurich have found a way to overcome the weak gravity and weaker nutrients found on the Moon and other planets.

By  Shelby Rogers
Oct 20, 2018
ISS astronauts brought a zinnia flower on board the space station in 2016 NASA via Wikipedia Creative Commons

Whether it’s the Moon or Mars, establishing reliable food sources will be one of the biggest challenges as humans look to explore and colonize other planets. One of the most appealing concepts is space farming, but researchers have struggled with how to grow vegetation with limited gravity and nutrients.

However, recent research shows plants and vegetation could stand a chance thanks to one hormone. A team of biologists from the University of Zurich discovered strigolactone could make space farming possible. The hormone promotes symbiosis between fungi and plant roots, boosting plants’ chances of survival -- even in conditions as hard as the Moon’s.

The idea of space farming has intrigued astronomers and futurists alike. Teams at NASA, SpaceX and Blue Origin have all looked into the possibility, especially with regard to colonizing Mars. One possible answer would be to grow the crops on the Moon before being transported to Mars. However, the Zurich team noted there’s a high cost both monetarily and ecologically to moving the fertilizer needed to replicate Earth-like plant growth.

Instead, the Zurich team explored ways to improve a plant’s chances of survival in harsh conditions rather than changing those conditions. They closely studied the process of mycorrhiza -- a symbiotic relationship between the roots of plants and fungi. Fungal hyphae give plant roots more water, nitrogen, phosphates and trace elements. The plants give the fungi the excess sugar they produce. 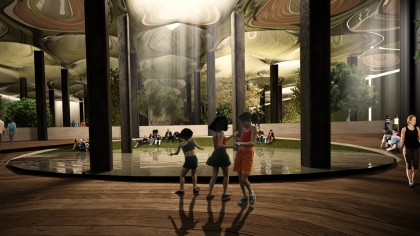 The researchers used petunias to explore the potential of vegetation being grown in restrictive environments. Petunias, the researchers explained, give a model organism for plants. They're part of the nightshade family (Solanaceae) which also includes common vegetables like tomatoes, potatoes, and eggplants. Gauging how well the petunias fared gave researchers an idea of how more commonly consumed vegetation would do.

The researchers noticed this system is a way for plants to survive even when a soil lacks a lot of nutrients. However, they noticed microgravity ruined the chances of mycorrhiza’s symbiosis -- and thus, the plant’s survival rate.

The future of plant growth in space

While this might be a giant step forward in growing plants on a lunar surface, astronauts have been growing plants in space for years. For decades, ISS astronauts have taken plants with them to the ISS to study how they handle being in a pressurized yet weightless controlled environment. These space gardens have also been known to help give a refreshing atmosphere on board the ship.

The Zurich team hopes their findings can bring those successful space gardens to a lunar or even Martian surface.

“In order to get crops such as tomatoes and potatoes to grow in the challenging conditions of space, it is necessary to encourage the formation of mycorrhiza,” explained team leader Lorenzo Borghi. “This seems to be possible using the strigolactone hormone. Our findings may therefore pave the way for the successful cultivation in space of the types of plants that we grow on Earth.”

Via: University of Zurich

Engineers Are Creating a Real Space Elevator. Can They Succeed?