Biomimicry: This Search And Rescue Drone Can Change Shapes During Flight

University of Zurich researchers have created a drone that transforms to fit the surrounding environment's needs.

Drones offer people the ability to fly into areas that may be dubbed too dangerous for humans. However, drones are not perfect because of their limited ability to move in the air.

Taking inspiration from the flight abilities of birds, University of Zurich researchers have innovated drone technology even further.

Created by a research team from UZH, the bird-like drone has a talent that can be found in birds across the world. 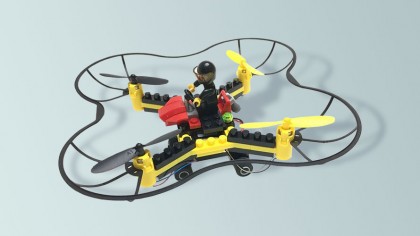 In nature when a bird flies through a narrow passage or abstract opening, the animal can instantly contort its wings to fit the area while in flight.

Until now, if you were to attempt to get a drone through a tight spot, you would have to change the size of the drone to fit through the hole.

Though not as elegantly done as in nature, the UZH ’s drone can morph and contort its four arms to adapt to the environment, all while maintaining flight stability, carrying small payloads and analyzing the surrounding area.

The newly created drone, made alongside the Laboratory of Intelligent Systems at EPFL, adapts to what is the need in the field, creating new “shapes” depending on the area. When flying around normally, the drone has its arms in the standard X shape.

However, if you were to send the drone through a narrow passage to find survivors in an inaccessible area, the drone will take an “H” shape, tucking in some of its arms along one axis, or even create an “O” shape, having all the arms folded as close as possible to the body.

If you need to inspect an obstruction or object while in flight the drone can take on a “T” shape, bringing the camera as close as possible to the area that needs to be inspected. UZH researcher Davide Falanga, describes the project perfectly stating:

“Our solution is quite simple from a mechanical point of view, but it is very versatile and very autonomous, with onboard perception and control systems.”

He continues, “The final goal is to give the drone a high-level instruction such as ‘enter that building, inspect every room and come back’ and let it figure out by itself how to do it.”

Drones like these could prove to be powerful tools for first responders looking for survivors or even checking out areas that may be contaminated or lack structural integrity.

Drones for Hunting: Hunters Are at Risk of Breaking the Law

Birds Use Drag to Takeoff in New Study