Biostasis: Could Slowing Biological Time Save Soldiers Lives on the Battlefield?

Biostasis could be the answer to saving more soldiers lives on the battlefield. It aims to do this by fighting time itself, at least on the cellular level.

Could slowing down biological time help save soldiers lives in the future? DARPA certainly thinks so, and they have just started research into the question with their Biostasis program.

Battlefield medics are all too aware that they have a brief window of opportunity to treat battlefield injuries before they become fatal or disabling – especially, while under fire.

DARPA has started to explore a potential solution. They believe it should be possible to extend the so-called Golden-Hour by slowing down the wounded soldier's biological clock.

The new Biostasis research program hopes to 'freeze" cell activity using biochemicals that would control the cell's processes at the protein level.

They hope to do this by "extending the golden hour, not by improving logistics or battlefield care, but by going after time itself, at least how the body manages it."

In truth, however, many cases need immediate attention over time periods much less than an hour. This is why militaries around the world have invested heavily in removing casualties from the field as quickly as possible.

The logistics of this are difficult as it is, but in an active combat zone, it can be impossible to get casualties out fast enough – especially if there are not enough rapid medical transports available. 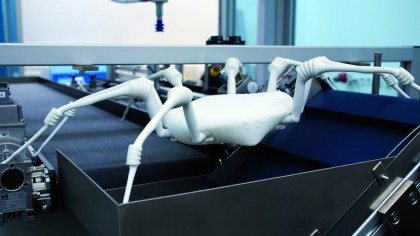 Biomimicry: The Sincerest Form of Flattery

DARPA is under no impression that this is going to be an easy task. They need to find a way to slow down every cell at, more or less, the same time.

It will not be possible to slow down some cells and not others. The process also needs to be reversed without causing long-lasting damage to cells.

Biomimicry is the Sincerest Form of Flattery

DARPA plans to develop new possibilities to extend the time needed to treat casualties. They hope to do this not by improving recovery methods or emergency care but by declaring war on time itself.

Biostasis hopes to use molecular biology to find new ways of controlling the speed living systems operate in. This would help extend the window of time available to medics to treat casualties before critical systems or organs fail.

“Nature is a source of inspiration,” said Tristan McClure-Begley, the Biostasis program manager. “If we can figure out the best ways to bolster other biological systems and make them less likely to enter a runaway downward spiral after being damaged, then we will have made a significant addition to the biology toolbox.”

DARPA's Biostasis might not be pure fantasy, as allegories exist in nature. Animals like tardigrades and some frogs are able to stabilize their cells during extreme conditions using a process called "cryptobiosis".

This is a state whereby all metabolic processes seemingly shut down without killing the organism. Wood frogs, for example, are able to survive being frozen completely solid for days. Tardigrades go one step further and are able to survive in environments that lead to near total dehydration, even high levels of radiation.

Wood Frogs and tardigrades perform this amazing trick using different molecular mechanisms. Despite this they do, however, share a common biochemical process: they can stabilize their intracellular machinery selectively.

DARPA might be able to learn from animals like these to develop similar techniques that might work in humans. This would provide vital extra time to treat wounds before their patient's vital organs fail.

“At the molecular level, life is a set of continuous biochemical reactions, and a defining characteristic of these reactions is that they need a catalyst to occur at all,” said McClure-Begley.

“Within a cell, these catalysts come in the form of proteins and large molecular machines that transform chemical and kinetic energy into biological processes. Our goal with Biostasis is to control those molecular machines and get them to all slow their roll at about the same rate so that we can slow down the entire system gracefully and avoid adverse consequences when the intervention is reversed or wears off.”

Biostasis is Still in its Infancy

DARPA's Biostasis program is still very young. It will, for instance, be taking proposer's questions on the 20th March 2018. If you want more information on the event, you can find them here.

DARPA, therefore, isn't expecting too much from it yet. It will initially focus on "benchtop" proofs of concept and is intended to focus on real-world uses towards its 5th year.

If Biostasis is a success, however, it will be a real breakthrough for medicine as a whole, both on and off the battlefield.

Paramedics would likely be some of the first beneficiaries of this new technology. It would give much-needed breathing space to get patients to a hospital, especially in remote locations.

Doctors could also focus more on the full recovery of patients rather than their mere survival. It would also be of incredible benefit to surgeons in the operating theatre.

DARPA will work with federal health and regulatory agencies throughout its development, prior to even being used on real-life patients. This will ensure a practical and safe pathway for potential future medical use on humans.

"By the end of the five-year, fundamental research program DARPA hopes to have multiple tools for reducing the risk of permanent damage or death following acute injury or infection," says DARPA.

The principles of Biostasis, if successful, could be applied to other technologies too. It could, for instance, be used to extend the shelf life of blood products, biological reagents, and drugs by reducing reaction times.

The secrets of life that Biostasis might reveal may open up avenues for an alternative to death in the future. Who knows it might make interstellar travel, with a hybernating living crew, a distinct possibility, time could tell.

Time travel could be possible only if parallel timelines coexist