Birds may have a "sixth sense" that allows them to see the earth's magnetic fields. Studies reveal this may be due to a Cry4 protein found in the eye retina.

For many years, scientist believed cells in birds’ beaks acted as compasses, helping them cruise through long distances and complex navigation patterns. However, newer research has now revealed that it may actually be proteins in their eyes that are responsible for birds’ keen sense of direction by allowing them to see magnetic fields, an ability dubbed the “sixth sense.”

Two studies, one on zebra finches and another on European robins, have both identified a light-sensitive protein in the retina called Cry4 as the molecule potentially responsible for the ability to see the earth’s magnetic fields and therefore function as a quantum compass. According to these researchers, this ability relies on an innate attribute of electrons called “spin.”

What is "spin"? As explained in an Annual Review of Biophysics paper, the process is due to molecules with odd number of electrons, which are left unpaired, becoming sensitive to external magnetic fields.

The process is complex but, in the end, it is believed to produce a pair of radical molecules that are sensitive to the earth’s magnetic fields and that could combine according to which direction the bird is facing. If this process were to be taking place in the birds’ eyes, it is believed it could actually enable them to see magnetic fields.

Cry4 is part of a class of proteins called cryptochromes, which are known to be involved in circadian rhythms, or biological sleep cycles (SN: 10/02/17, p. 6). But at least some of these proteins are also thought to react to Earth’s magnetic field thanks to the weirdness of quantum mechanics (SN: 7/23/16, p. 8).

Cry4 to be functioning as a compass

Atticus Pinzon-Rodriguez, a biologist at the University of Lund in Sweden, and his colleagues examined the retinas, muscles and brains of 39 zebra finches for the presence of the three cryptochrome proteins, Cry1, Cry2 and Cry4, in order to determine which of them was responsible for this “sixth sense.”

They discovered that “while levels of Cry1 and Cry2 followed a rhythmic pattern that rose and fell over the day, Cry4 levels remained constant, indicating the protein was being produced steadily.” Meanwhile, researchers studying European robins also found that the birds “showed constant levels of Cry4 during a 24-hour cycle, and higher levels during their migratory season.” 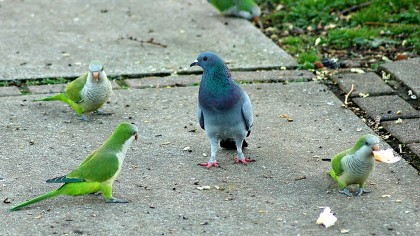 In addition, these studies also revealed that the Cry4 was located in an area of the birds’ retinas that receives a lot of light, potentially enabling it to function as a compass.

Despite quite a bit of evidence, Henrik Mouritsen, an animal navigation expert at the Institute of Biology and Environmental Sciences in Oldenburg, Germany, and part of the robin study team, said that the role of Cry4 still remains to be proven. Further studies, such as the observation of birds without the protein, may prove more definitive.

In the meantime, we just have to marvel at the ingenuity of nature and trust that birds will always find their way, Cry4 or not.

Via: Cell, The Royal Society Publishing