Black cars are now illegal in the Turkmenistan capital of Ashgabat. People who own black cars have them confiscated until they promise to paint them white.

Black cars have just been made illegal in the city of Ashgabat, the capital of Turkmenistan and black cars still on the road have reportedly been impounded. The new law seems to be because of Turkmenistan’s president, Gurbanguly Berdymukhammedov, who is passionate about white, is very superstitious. Berdymukhammedov himself apparently drives a green Bugatti Veyron. But banning car colors are really only the tip of the iceberg when it comes to unconventional rules inside the Central Asian country. The country is considered to be one of the most highly censored in the world with the government controlling almost every aspect of daily life. According to Human Right Watch, "Turkmenistan remains one of the world’s most repressive countries. The country is virtually closed to independent scrutiny, media and religious freedoms are subject to draconian restrictions, and human rights defenders and other activists face the constant threat of government reprisal."

Unlucky Ashgabat citizens who currently have black cars can have them towed at any moment by government officials. The confiscated cars are held in a government yard until the owner of the car agrees to paint the offending vehicle white. 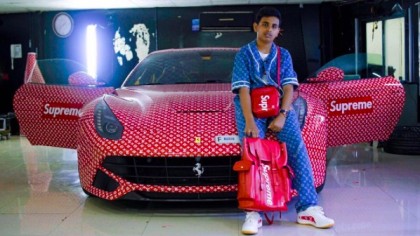 The problem is, repainting a car does not come cheap, and the increased demand has caused a spike in the price of the repainting. Online paper, The Diplomat spoke to locals who described being told the repainting of their car would cost 7,000 manats ($1,996) and that the price would go up to 11,000 manats ($3,137) if they waited a week. The average salary in the city a mere 1,000 manats ($285).

Rumours of the black car ban started circulating in 2015 when the president banned the import of black cars to the country. The new rule regarding the ownership of any type of black car reportedly started on January 1st, 2018. There have been no official statements released by the government regarding the imposing new law but the President’s passion for white is not a secret. Berdymukhamedov has made his dream of an all-white Ashgabat city pretty clear by the rapid construction of dozens of buildings clad in white marble.

Marble buildings and gold statues the norm in Ashgabat

Vanity projects are common in Turkmenistan. The country’s first president Saparmurat Niyazov had a gold statue of himself made that rotated to always face the sun. Not to be outdone by the past, the white-loving current president had his own gold image made of himself astride a horse atop a cliff of, yes you guessed it, white marble. Ashgabat has the Guinness World Record for the most number of white buildings, but while things may appear clean and pure on the outside, the country and its citizens face tough times ahead.

According to a recent article in openDemocracy Turkmenistan’s faces dire economic problems and the consequences could threaten the state's security. “In the regime’s authoritarian worldview,” they write, “it is Turkmenistan’s wider population — and not the élites surrounding the president — that has to be hit most severely by this deepening economic crisis.” This has come as shortages — particularly with respect to flour, sugar, oil — and price increases; lack of access to hard currency, with bank machines often empty of actual cash and Turkmen abroad limited to drawing out only $50 per day. Meanwhile, in the rush to put on a good show for the Asian Indoor and Martial Arts Games in September, Ashgabat garnished the wages of state employees by 20-30 percent — officially a “donation.”