The Bloodhound SSC kicked off the first rounds off its public test this week, all in anticipation of the 2019 target of capturing the land speed record.

The Bloodhound SSC is a supersonic car unlike any you’ve ever seen before. By most accounts, aesthetically it’s one part Formula 1 racecar, and one part spacecraft. And let’s not forget about the fighter-jet-like nose. In other words, some pretty powerful machinery.

The team of automotive and aeronautic engineers who have put the car together resemble both a NASA team and a pit crew. Now that the rigorous trials have concluded, the Bristol-based team, along with thousands of eager supporters who have been following the progress of the Bloodhound, get to see the car in action, to really see how it performs.

The @Bloodhound_ssc has its first "gentle" test at 200mph at #Newquay2017, with live onboard footage by @Hayfisher_TV using #Vislink's CFU4 pic.twitter.com/KJLHb306dI

October 26th, 28th and 30th are the dates, and Cornwall’s Newquay Airport has been chosen as the lucky venue. The Southwest UK city has been inundated with people the entire week, all eager to get a glimpse of the action. The enormous task of putting together the car has been nine years in the making and there has been a frenzied buildup leading to this week’s events. On the first test run alone this week, the car exceeded all expectations, breaking the speed barrier at 338kph, achieved in only 8 seconds. 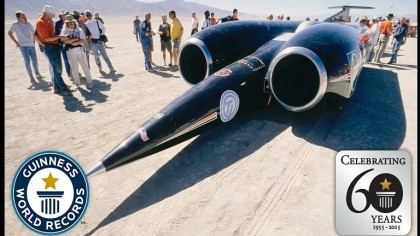 Here are the most important specs of the impressive supersonic car:

• The body of the car covers a staggering 13.4 meters.

• It’s been fitted with a Rolls Royce ex-Eurofighter engine.

• That means it has a 135,000 horsepower engine, exceeding the combined amounts of more than six Grand Prix cars.

• With the rocket motor which will be fitted later, it will be able to achieve a maximum speed of 1,610kph!

All eyes are on RAF Wing Commander Andy Green, who has set his sights on breaking the world land speed record. Fans will have to wait until 2019, where he will make the attempt on Hakskeen Pan, a dried-out lakebed that stretches out 19km in Northern Cape, South Africa.

In terms of preparation, the Rolls Royce engine used in the public trials will be swapped out for a more appropriate EJ200 jet engine and Nammo hybrid rocket.

Green spoke with the BBC about what he sees as the historical significance of the record attempt:

"This is about showing the world what we're about,” adding about his chances of capturing the record, “We've designed and built the most extraordinary, sophisticated, high-performance land speed record car in history. It will do 0-200mph in about eight seconds. For a five-tonne vehicle - that's eye-popping performance."

This is also perfect timing, since it was twenty years ago on October 15, 1997 that the Thrust SSC (Super Sonic Car) in Arizona was commanded by Green to set the old record of 1227.986kph.

The projected 0 to 1,610km/hr time will be 55 seconds. The supersonic car which spits fire (what else can we ask for?) we can all safely agree is well on its way to setting the record. Even if we are not among the lucky few in South Africa, we will all be ‘cheering from the sidelines’ in our respective countries.