The uncrewed test flight is the third one using Blue Origin’s most recent model of the single-stage vehicle.

Ready for lift off! New Shepard is gearing up for its ninth mission. We’ll be doing a high altitude escape motor test – pushing the rocket to its limits. Launch is tomorrow. Details on live webcast to come. pic.twitter.com/TxHahnNmu9

The launch was webcast live on Blue Origin's website. The site also featured a payload manifest for the mission.

"An awesome feature of New Shepard is its modular interior design. While in the future it will feature six seats to fly people, we’re already flying science and education experiments for microgravity research," read the site.

Mission 9 will feature a crew capsule mounted on top of the rocket to carry the experiments as well as a dummy called “Mannequin Skywalker.” The dummy, flying on board a New Shepard ship for the third time, will allow scientists to test future passenger conditions.

Mannequin Skywalker is on board for Mission 9. He shares the capsule with science and research payloads from commercial companies, universities and space agencies. Check out the full payload manifest here: https://t.co/bxbQUi6IpZ pic.twitter.com/5EUedVVC6Y

After launch, the reusable New Shepard booster will climb to an altitude of 62 miles (100 kilometers), the internationally-approved boundary of space, and then proceed to land nearby. The launch will also see the New Shepard rocket perform a high-altitude escape motor test to push the ship to its limit.

On Mission 9, we’re firing the crew capsule escape motor at the highest altitude ever. We are stressing the rocket to test that astronauts can get away from an anomaly at any time during flight. Live webcast starts T-20 on https://t.co/XNq9WB3aZ2 pic.twitter.com/GgPfmlUjye

Human trips to space on the horizon

If all goes well, the demonstration may well see Blue Origin closer to flying people on brief trips to space. Last week, it was reported that the firm's space trips could cost at least $200,000.

However, Blue Origin rebuked the amount in a statement. "We have not set ticket pricing and have had no serious discussions inside of Blue on the topic," said the statement. 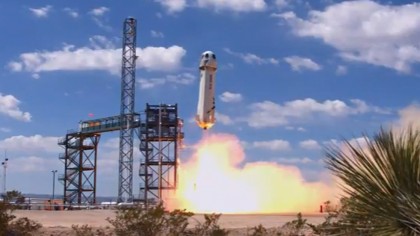 "We will begin selling tickets sometime after our first human flights and are focused on developing New Shepard. We have a flight test schedule and schedules of those types always have uncertainties and contingencies. Anyone predicting dates is guessing," read the statement.

In a previous interview, Blue Origin CEO Bob Smith did announce hopes to launch humans to space before the end of the year but emphasized rigorous testing was necessary. The company just completed its eighth test mission last April.

The test flight featured a "second round of commercial payloads on board New Shepard for in-space science and technology demonstrations." Meanwhile, today's mission 9 included, for the first time ever, employee cargo from the firm's “Fly My Stuff” program.