Reusable rocket company Blue Origin had its first successful test launch of its spaceship. The reusable New Shepard sub-orbital rocket launched from west Texas on Tuesday with no crew for a short space trip before landing back on Earth.

The successful flight from the SpaceX competitor marks the first time a New Shepard rocket system has flown since October 2016. During those trials, the rocket successfully tested its in-flight abort system.

"Today's flight of New Shepard was a tremendous success," Blue Origin CEO Bob Smith said in a statement. "It marks the inaugural flight of our next-generation Crew Capsule as we continue step-by-step progress in our test flight program. Congratulations to the entire Blue Origin team on a job well done and to our payload customers that gathered important data on the suborbital environment. Gradatim Ferociter."

Gradatim Ferociter is Latin for "Step by step, ferociously," and the phrase serves as Blue Origin's motto.

After separating from the capsule, the booster headed back toward Earth. It moved tail first and used its BE-3 main engine in order to slow down and steady itself during its return. 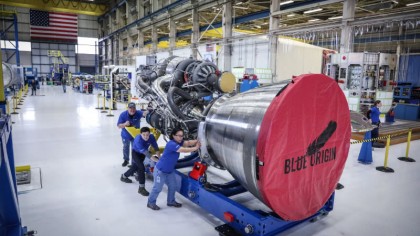 It then set out its four legs and made a neat touchdown on Blue Origin's circular landing pads. The booster controlled the speed enough to travel just 6.75 mph (nearly 11 kmh) on the descent before it touched down.

In total, the flight only lasted 10 minutes and 6 seconds after initial liftoff, according to the company.

The capsule carried 12 payloads from various customers around the world. One payload even included student artwork from a middle school in Colorado and an Arduino Nano circuit board complete with a sensor package programmed by those middle school students.

The long-awaited Blue Origin New Shepard capsule will seat up to six passengers comfortably. It's one of the biggest volume capsules comfortably built; each New Shephard capsule comes in at 530 feet cubed (15 cubic meters). On their 'space tourism' trip, the passengers will see Earth through large windows built for optimal viewing. These are the largest windows ever in space, according to the company.

Passengers will also experience times of weightlessness during suborbital trips around earth.

#NewShepard had a successful first flight of Crew Capsule 2.0 today. Complete with windows and our instrumented test dummy. He had a great ride. @BlueOrigin pic.twitter.com/PZHXWXjuw9

No official word yet as to when the New Shepard capsules will be available to enjoy. Blue Origin has given estimates as early as next year, but they've not put out pricing for trips.