Successful Landing of its Reusable Rocket and Crew Capsule 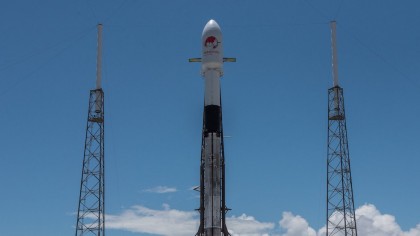 Blue Origins, the private space firm founded and financed by Amazon’s Jeff Bezos, announced on Twitter this morning that the New Shepard’s rocket booster and crew capsule touched down on Earth after the booster rocket propelled the capsule to the edge of space, reaching 350,775 ft above the earth.

Like the Dragon launch system used by SpaceX and unlike previous rockets in the history of the space program, the New Shepard is meant to be reusable, reducing the cost of sending humans and materials into space.

To achieve this, the rocket, once the crew capsule detached at around 200,000 ft, used a set of fins to keep it upright as it descended back to earth. After a couple hundred thousand feet of free fall, mechanical drag brakes deployed to slow the rocket’s descent.

Then, at around 8,000 feet, the rocket fired again, using the thrust of the propulsion system to slow the rocket to a near hover above the ground, where it came to settle on a set of retractable legs.

Touchdown of the #NewShepard crew capsule! Looks to have been a wholly successful flight today #NS10 #LaunchLandRepeat

The crew capsule meanwhile began its free fall back to earth after spending several minutes higher than 50 miles from the Earth's surface, which the US government recognizes as the boundary where space begins. For this mission, several experiments were on board the capsule to take advantage of the period of zero gravity that the capsule would have at its apogee.

After the capsule—which sports the largest windows ever built into a space-touching vessel—began falling back to Earth, it used a two-stage parachute system to slow its descent at around 30,000 ft. By the time it touched down on Earth, it was falling at only about 15 miles an hour.

Blue Origins is not the only game in town. Besides aerospace giants like Northrup-Grumman and Lockheed-Martin who have long-existing ties to the US space program, the growth of private space exploration companies has been fueled by billionaire industrialists.

While SpaceX has openly said they plan to take private customers into space on their vehicles in the near future, SpaceX is mostly a logistics company, supplying astronauts in the ISS at a lower cost than previous NASA efforts.

Virgin Galactic and Blue Origins though are clearly positioning themselves to be the companies of choice for space tourism in the near future. Virgin Galactic has already sold 600 tickets on the Unity for future flights, priced anywhere from $200,000 to $250,000, and the Blue Origins crew capsule’s large viewing windows say a lot about the ultimate intentions of Jeff Bezos’s venture.

Like wealthy railroad magnates carving up the American West in the late 1800s, Musk and Branson have shown a concerted determination to get a foothold in space, but after the success of today’s New Shepard mission, Bezos has made it known that he is very much a player in this new frontier for mankind.