Blue Supergiant Stars Shimmer Due to Waves on Their Surface

Blue supergiant stars shimmer in brightness and now we know why: waves along their surface.

Nearly all blue supergiant stars shimmer in brightness and now we know why: waves along their surface due to internal convection currents.

Waves Along the Surface Begin Deep Within Star

Stars have been objects of endless fascination for humans since our species first arrived on the scene, but it has only been a very recent development that we have been able to actually study them. Still, not all types of stars have been as well studied as others and blue supergiants are among the least studied of all.

Blue supergiants burn incredibly hot, incredibly fast. Unlike our sun or cooler red giants and red dwarfs, blue supergiants burn through their fuel in very little time before blowing themselves out in a spectacular supernova, which makes these types of stars much less likely to still be around when we go looking for them. Still, we have found them in the night sky and with the development of space telescopes, studying them has become significantly easier in recent years. 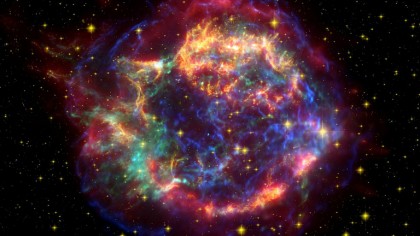 Stars like blue supergiants are of particular interest for astronomers because it is in these stars that elements larger than helium are produced and distributed into the galaxy through their supernova. In the course of their observations of blue supergiants, astronomers have often observed a shimmering in the brightness of these stars that they could not explain and before the advent of space telescopes, they had been unable to better observe these stars to find out why. Now, they're getting a much clearer view of these stars and it is giving them insight into what's going on below the surface.

One of the most exciting of these recent observations is the "waves" along the surface of the star that is responsible for its shimmering qualities. "We are now entering a golden age of asteroseismology of hot massive stars thanks to modern space telescopes," said Dominic Bowman, a postdoctoral researcher at KU Leuven and a co-author the study of the blue supergiant waves, published this month in the journal Nature Astronomy. "The discovery of these waves in blue supergiants allows us to study the progenitors of supernovae from a novel perspective."

"The discovery of waves in so many blue supergiant stars was a eureka moment," said Bowman. "The flicker in these stars had been there all along, we only had to wait for modern space telescopes to be able to observe them."

"From the frequencies of the waves at the surface," Bowman added "we can derive the physics and chemistry of their deep interior, including the stellar core. These frequencies probe how efficiently metal is produced and how it moves around in the factory."

AI Tool Tracks the Time Politicians Spend on Their Phones

Inventors Who Tested Their Inventions Out on Themselves