BMW is ready to reveal their high-anticipated X7 iPerformance SUV with a massive interior full of technologically advanced instruments.

BMW is adding to its crossover line up with a model that boasts the biggest interior of a BMW ever, and it’s even bigger than the X5.

The Concept X7 iPerformance will make its debut next week at the Frankfurt Motor Show. “It gives you a good idea of what the X7 will look like,” BMW Group design chief Adrian van Hooydonk told TopGear.

BMW has been planning on debuting a “sports activity vehicle” for a while now. Like Car and Driver states, “there’s room above today’s X5 for something more premium-feeling to satisfy a luxury market that is abandoning sedans almost wholesale in favor of large, lavish SUVs.”

This car is big, so says almost all automobile media outlets. It has three rows of two handcrafted leather seats with an interactive lighting concept running throughout the cabin.

The last two row of seats each has their own individual screens which are connected to the front panel. One unique feature is “the transfer of messages is displayed by interacting strips of light that move through the interior from back to front along the doors,” states the company website. This means that passengers can communicate with each other through an interconnected cloud system. Like avatar on wheels.

It boasts a TwinPower turbo petrol engine connected to eDrive technology. Since this car is a part of the iPerformance range, this is a plug in hybrid with an electric motor providing for the gasoline engine. The exact engine technology has yet to be specified but Car and Driver figures “on BMW’s ubiquitous 3.0-liter inline-six for production, with the 4.0-liter V-8 serving in more muscular variants.”

The front features the classic BMW double kidney grille and large intakes which meld into lines that slope over the panoramic glass roof.

A single piece light bar stretches across the tailgate along with a chrome strip in the “taught and narrow rear.” The front contains very sleek headlights; these laser lights have “X” designs. Along the sides, it’s the first model to have round wheel-arch cuts for the 23-inch wheels. 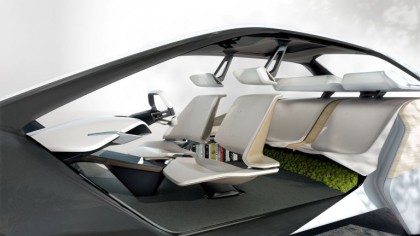 The show starts next week and is Germany’s most important auto event for its home grown car manufacturers such as BMW, Volkswagen, Mercedes, Porsche, and Audi, despite the shadow of the ongoing Dieselgate emissions scandal.

However, probably the biggest draws of this kind of event are the concept cars like the X7.

Other notable companies include Porsche which will unveil its third-generation Cayenne and Japanese brand Honda will be launching a hybrid version of their CR-V family SUV. The much hailed Suzuki Swift will also get a Sport upgrade.