The UK science minister, Jo Johnson explained just what the submarine was up to: "Boaty is already delivering new insight into some of the coldest ocean waters on Earth, giving scientists a greater understanding of changes in the Antarctic region and shaping a global effort to tackle climate change." 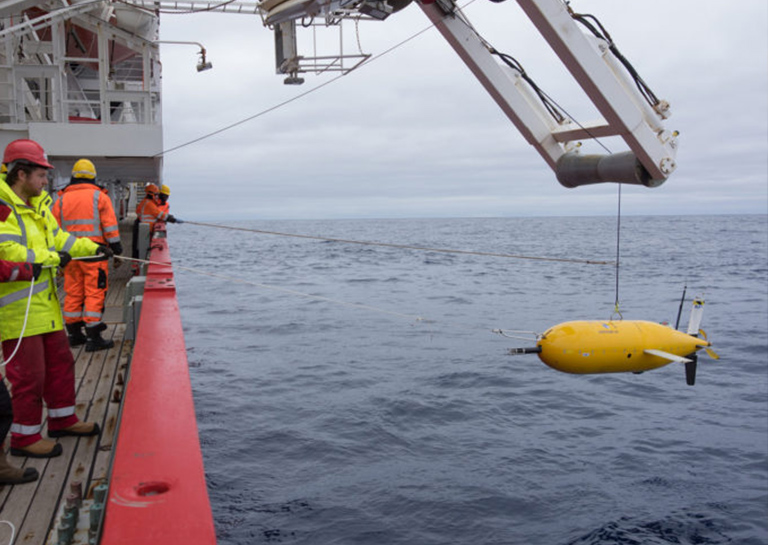 Boaty McBoatFace got its unusual name after the Natural Environmental Research Council's  national competition to name a new polar research vessel took an unexpected turn. Former BBC radio host James Hand suggested "Boaty McBoatface”, which surged ahead winning the public voting competition. This was a little too much for the conservative council who rejected the winner, opting to christen the new boat RRS Sir David Attenborough instead. They did, however, honor the popular choice by naming a research submarine ‘Boaty McBoatface”.

Researchers want to understand how ocean currents are changing

Researchers from the University of Southampton deployed Boaty McBoatface off on board the RRS James Clark Ross. The maiden voyage of Boaty McBoatface required it to explore some of the deepest and coldest waters of Antarctica. It was investigating the region’s ocean currents monitoring their speed, salinity, and temperature. This research will provide valuable data for scientists who are concerned with how the ocean is reacting to rising global temperatures and increased freshwater in ocean systems.

This research will provide valuable data for scientists who are concerned with how the ocean is reacting to rising global temperatures and increased freshwater in ocean systems. There are some theories that these changes are influencing the way these powerful ocean currents move. The circulation of water around the globe is critical in keeping ecosystems functioning, even minute changes in these huge bodies of water can have devastating effects on wildlife.

The information gathered by Boaty McBoatface in the Orkney Passage, a passage of water off Antarctica, is set to be the most valuable. According to the researchers on the project, this is the first time data has been gathered from this site. The passage is more than 4000 meters deep. Boaty McBoatface will be deployed again in the coming months to gather more data in the area.

Researchers have begun analyzing some of the data captured from their seven-week mission and released a visualization of their findings so far:

Lead scientist on the mission Alberto Naveira Garabato explained, "We have been able to collect massive amounts of data that we have never been able to capture before due to the way Boaty (Autosub Long Range) is able to move underwater. Up until now, we have only been able to take measurements from a fixed point, but now, we are able to obtain a much more detailed picture of what is happening in this very important underwater landscape."